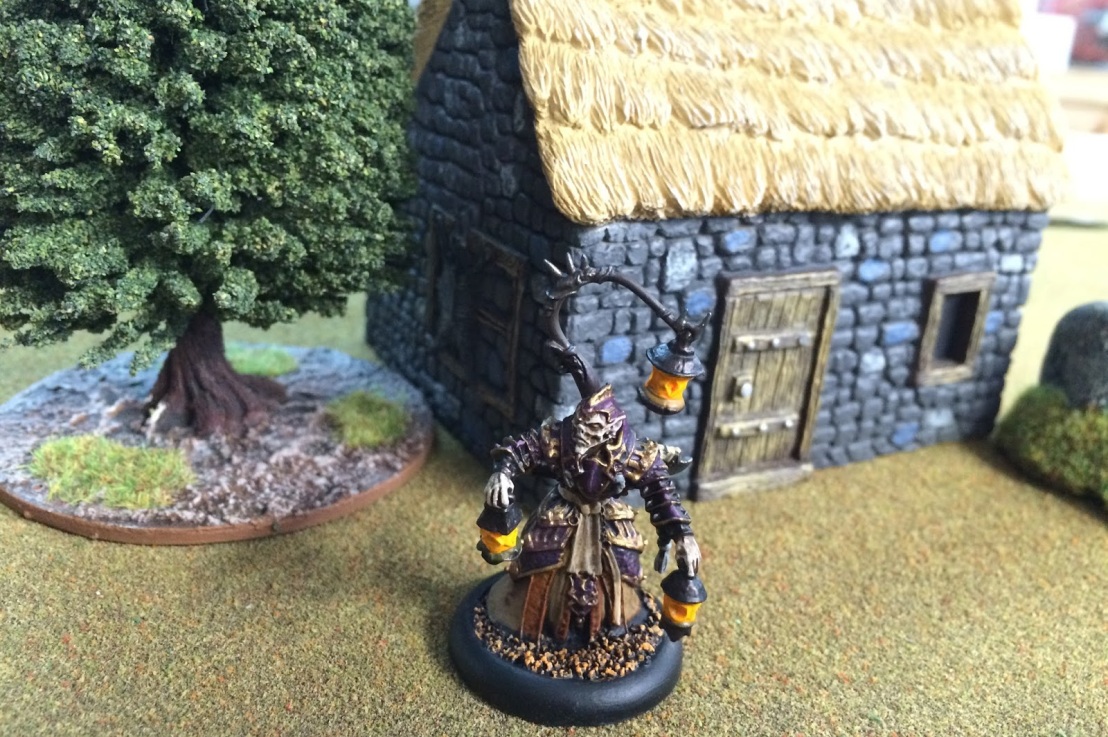 Author’s note: It was finally time to migrate my gaming onto one single blog for simplicity’s sake (and because of my shiny new domain). The first few posts here will be combination posts that summarize my prior blogs. They’ll be maintained, but all new posts will happen on this site. You can check out all the older stuff at my 40k Blog, my Warmachine/Hordes and Pathfinder Blog, and my Warhammer Fantasy Blog–but be sure to follow this site for the one-source thoughts, comments, and records of all my gaming.

I’m a bit of a Warmachine/Hordes fan (as followers of this blog will find out), so I can’t resist putting up a few photos of my models from my three main factions onto this blog. Currently, I’m focusing on my Skorne and Protectorate of Menoth armies. I also have a somewhat sizeable Legion of Everblight force that I’m holding onto, and a small demo set of Circle of Orboros for teaching people how to play Hordes. In the past I had a decent-sized Khador army, a small Trollbloods contingent, and a relatively huge Cryx force–all of those have migrated to new homes now.

My Skorne are probably what I consider my “main” faction currently. I’ve got more than a few warbeasts painted up and I’m finishing some more infantry and support pieces. But I’m also oddly mad about collecting all of their warcasters. My plan is for casual games to get a carnival spinner, and bring general lists–then right before the battle spin the “Wheel! Of! Skorne!” to see which warlock I’ll have to field at random. My distinct problem is liking them all too much–so one of each named character is high on my list of “things to finish”. 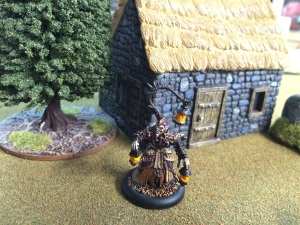 My newest Warlock addition: Void Seer Mordikaar. The lanterns light with the souls of the fallen to power his cruel magics. I’m still working on painting some units to accompany him on the field.

Another of my Skorne Warcasters, Lord Assassin Morghoul. Here he’s in a bit of dire jeopardy from a recent three-player game: he got knocked down and then finished off by a charging Retribution Arcanist. What an ignoble fate… 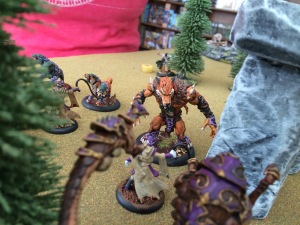 My Skorne beasts and infantry face down some advancing Circle warbeasts–a lovely paint job by my pal Roger. I went with a pretty standard Skorne color scheme, and just swapped the deep red for a dull purple.

My Cyclops Brute dealing with the push-and-pull of Dan’s amazing Retribution Battle Mages. Skorne has such variety in the warbeasts that they’re a fun faction to paint and model. 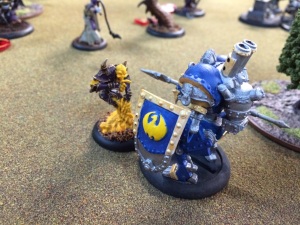 The Void Spirit shows the color scheme I’m using for “magical effects”–all the gems on warlocks and energy elements of the army will be in varied yellow tones.

I’m hardly as far along with my Menoth painting as my Skorne painting, so you’ll see far fewer of these models until I get more work done. I’m going for a “religious anarchists” theme, of neutral colors with bright red menofixes (the cross-like symbols on all the models). I’m also going with a non-standard Warjack colors (browns and dull oranges) and using greytones instead of metallic paints for the metal bits of the army. 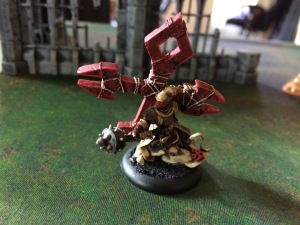 The Monolith Bearer is such a silly-cool model I had to include a picture of him. He shows the tones of the infantry pretty well, and the striking reds of the menofixes and the dust-masks of the models.

And of course, I got my Wracks painted up right away. What good is playing the “religious anarchists” if you don’t add in their modes of torturing their foes?

I’m just sticking one photo in here to show the color scheme I’m using for my warbeasts. While I have a fair-sized force painted up (three heavies, four lessers, four different warlocks, and the Throne battle engine) and some more to assemble, I’m a lot less enthused with Everblight than the other two forces so expect them to be a bit more rare in the posts of this site than the others.