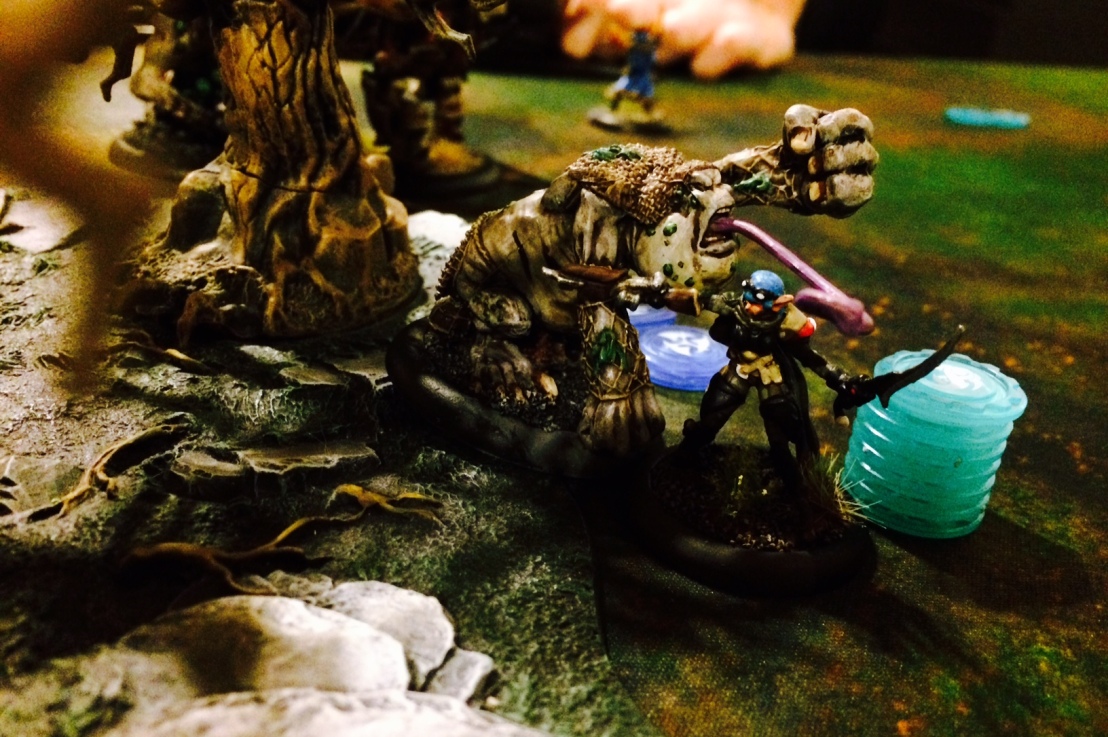 I did a thing. I started a new force. I mentioned in a prior post that after enough standing around and watching people play Trollbloods, I finally gave in and grabbed some myself. That means there’s only one thing to yell: TROLL!

I had two Trollbloods blisters lurking around my stuff from the past (about 3-4 years ago I had a Trollbloods passion for a hot minute), so broke them out and used them as a basis: Madrak Ironhide World Ender and a unit of Troll Whelps. I loved the whelps too much to dispense with them, and Madrak2 is just too epic a pose to give up. I may have even had plans to use him in a role playing game: every game can benefit from an awesome looking Troll about to swing a huge axe. In any case, I literally dusted them off, as they were in my hobby box beneath a pile of unused Everblight bits. And I nabbed a few new models to start to make a force. 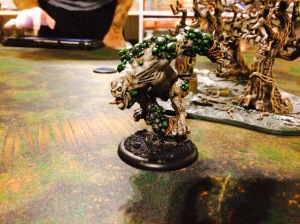 I wanted to get my paint scheme for the warbeasts sorted out first and foremost, as that’s the core of a force in Hordes. While I like the blue skin with darker blue stone/scales that is used in the fluff/demonstration models from the company, I wanted something different for my own force. I decided to give pale skin with green crystals a try. I’m reasonably pleased with how it turned out, and I have an idea for how some of the various models in the faction will look. For instance, my Earthborn Dire Troll is above, and you can see the way the green works. I made it so he was “absorbing” the rocks down by the ground, so I worked in some stone-looking ones on his arm there. With his Elemental Communion ability, I figured that he could be like a terrain chameleon in that manner–absorbing the look of the surroundings. I like the effect, and that means for some of the other elemental-style trolls it will be something I can continue (e.g. the Mountain King can have stone mountains but also surrounding green gem protrusions).

I also painted up one other warbeast in the testing phase: a Swamp Troll. I simply like the model, and I wanted to see how a model with far smaller stone protrusions would look with the green color I went for. I’m pretty happy with how he turned out. In painting him, I decided that as the trolls of the force got smaller they would be brighter and brighter shades of grey–so that the true Trolls, the Trollbloods, the Pygs, and the Whelps all have lightening hues (in that order).

In addition to painting, I got a starting game in with my forces. I had a few abortive test runs with the Trollbloods before, but this was the first game where I fielded painted models so it’s the first one I’m blogging about. I faced off with a 35-point Madrak2 list against my buddy Dan’s Kaelyssa-led Retribution force. He was testing out a bunch of new solos, and I am still getting the feel of Trollbloods so both our lists were a trifle out of the norm.

As is always true in tabletop wargaming, painted models perform better than unpainted ones–and my Earthborn Dire Troll and Swamp Troll were the two more successful models on my side. I made a number of errors, often due to limiting my charge and movement lanes due to intervening models with medium-sized bases. I have one medium infantry unit so far with my Skorne, and a whole set of Blighted Ogruns for my Everblight, but for some reason with Trollbloods the base-size issues seemed to get in my way.

The elves got ahead in points for the battle (Steamroller 2015 Close Quarters), so I was forced to make a last-minute play for caster assassination. I got really close, too–most of the opposing force was eliminated, but they were dominating their own flag. I managed to get Warpath up on Madrak, use his feat to chop a hole, then warpath the Swamp Troll as far as I could so it could move on its activation and take a shot at dragging Kaelyssa with its tongue. It hit, and did fair damage on the tongue. I even had enough to boost the attack roll after the Drag in hopes of finishing her last few boxes but missed with that swing. At the start of her turn, Dan sat on all her focus thinking she’d have to survive a free strike as she moved back to the objective. Then he realized that little old Sylys Wyshnalyrr was hanging out and could simply run over to control the objective and score the final point to win the game for the elves at 5 to 4 points.

Overall it was a great game. I got frustrated at my own mistakes, but I quickly recognized that it was just growing pains with so many medium-based infantry clogging the field. Soon enough I’ll get the hang of it. Now to get the rest of the gang painted!

One thought on “Warmachine/Hordes: Rise of the Kriels”