This week marked the first week of Company of Iron games.* First up, the painting progress I made: 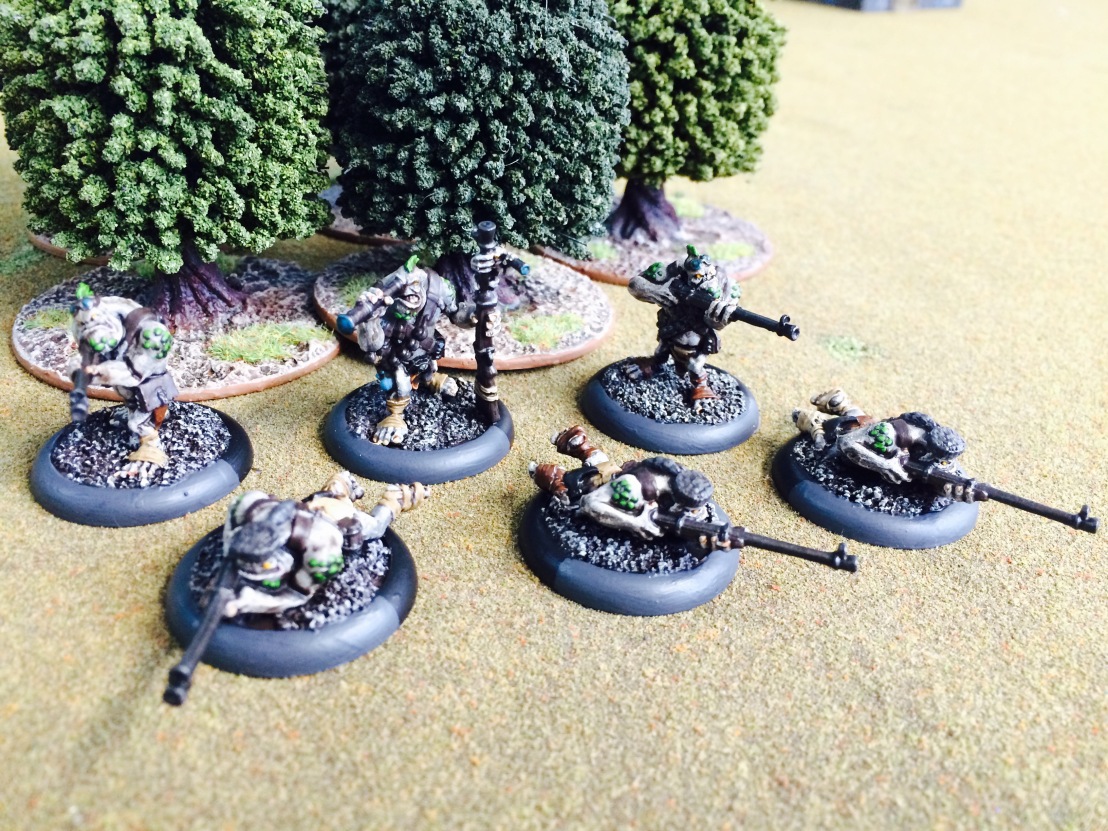 Pyg Bushwhackers add 5 points to my total. I think they turned out really nicely.

The Skorne Void spirit on the right adds another 2 points. I also added the Heap of Corpses that I created and painted myself as we’re doing some terrain modeling competition as part of the league.

Why the Skorne Void Spirit when I was working on Trollbloods for the league? Well, because as the Press Ganger running the event it felt like a bummer doubling up Trolls when one of the players decided to run them for the league. So I decided to run my Skorne in the league instead (there’s also a Cryx player, so my third army was no-go too). I don’t mind, as I love my Skorne and there are some upcoming tournaments that I’m leaning on taking them too over the summer. I’ll post updates on those, especially my entries for a regional Tier Four tournament in June.

My first battle of the league was a larger game against Ryan’s Cryx, followed by a platoon skirmish against Andy’ Minions. Because I had been focusing on painting the Trollbloods, my Skorne Platoon is sadly only partially complete in the pictures below. 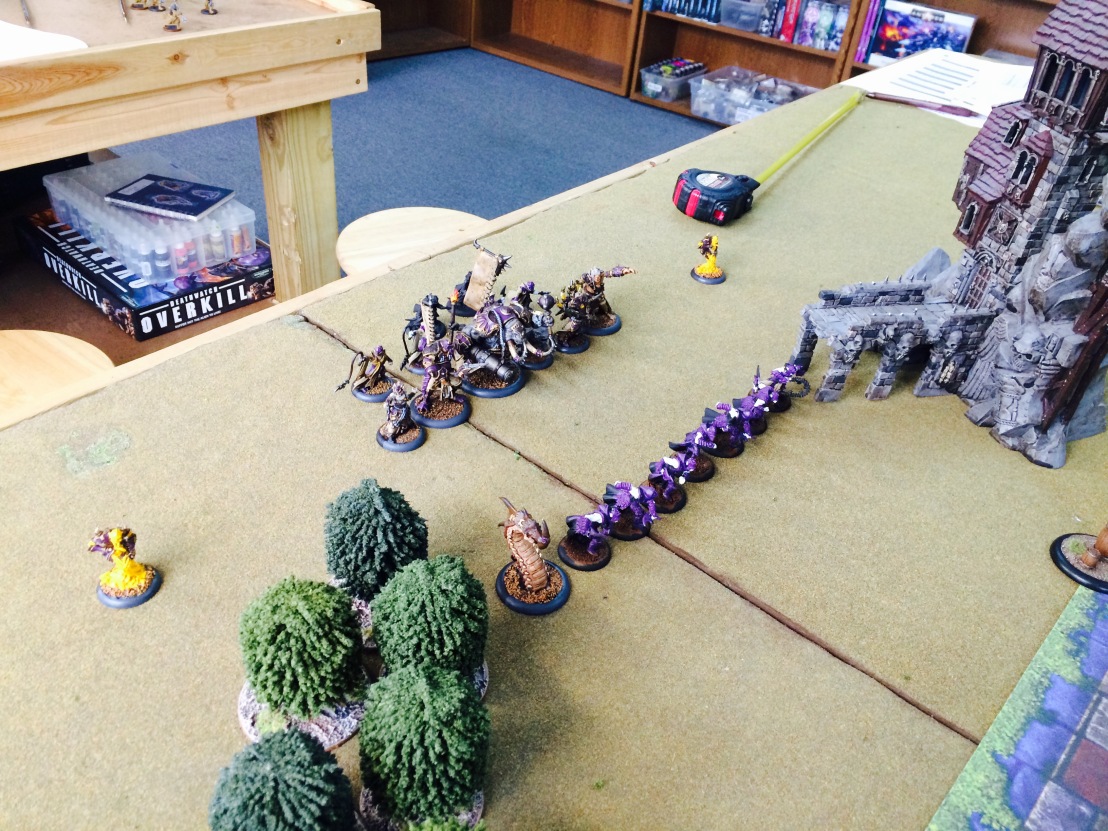 My opponent Ryan’s Cryx. Led by pSkarre and containing the Cryx Platoon, this was going to be a tough fight for my force.

Platoon on Platoon action… the Void Spirit slowed the Black Ogrun crew down, and took a free strike at the last one to leave his range (but missing, of course).

The center was a jammed, overlapping mess. Skarre has a real advantage in a grind situation, so I had to get some quick success or Hexy2 would not be able to finish things.

The Cannoneer is normally a shooter, but this time he had to clear the path with his melee ability (and present his back to Hexeris2 as a Ashes to Ashes target should I need an easy defense to hit). Skarre was on only a single Focus point, so Hexeris2 charged and lit into her with his spells (all the more powered by his feat). He cut her down with a final blast of magical force.

The second game saw my Skorne Platoon defending a safe house that my opponents were trying to get a military officer into. It’s a great little mission that plays well with the small forces.

Andy’s great-looking Minions Platoon for the league were my opponents. 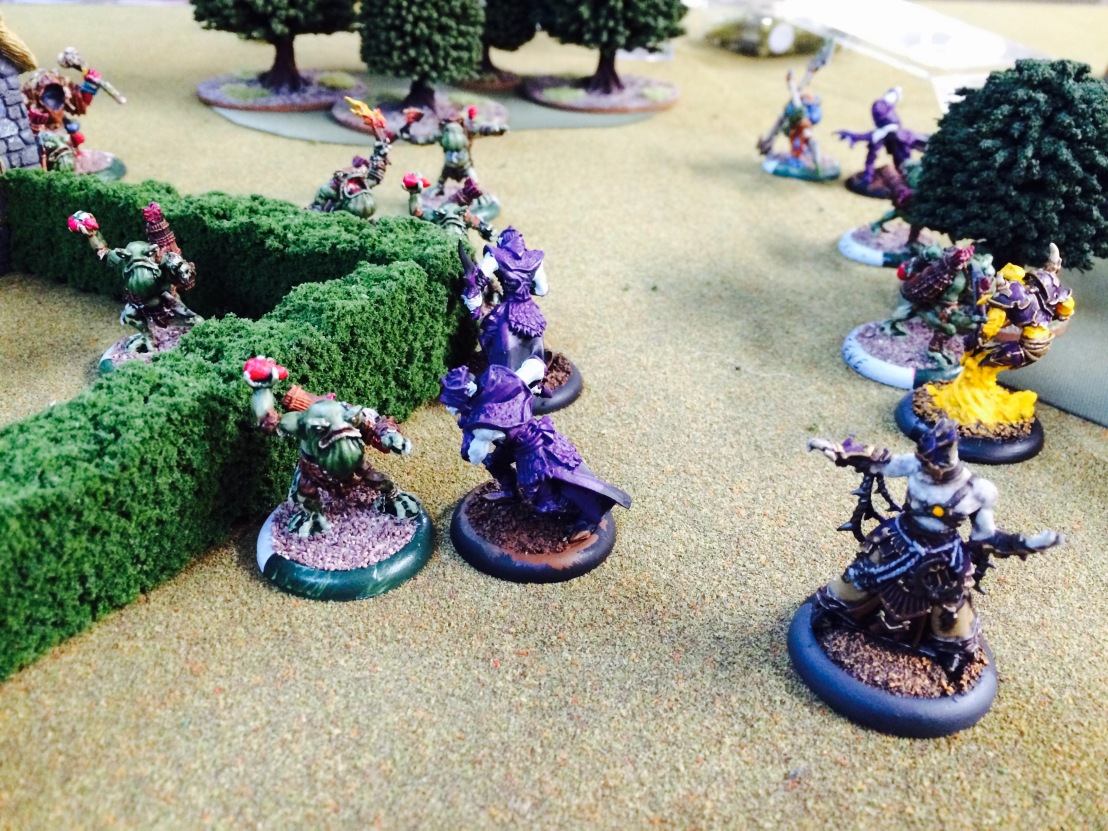 The clash with the Croaks was just too much for my forces in this scenario. I had a couple of shining moments where the granted Poltergeist ability for the Platoon made for good protection, ultimately I wasn’t able to seal down enough space nor able to reach out and take out the Military Officer.

So far so good for the Company of Iron League. The Platoon Missions especially seem promising, and I’m excited to see how my Skorne fare in further battles. I’m thinking that I need to swap Hexeris2 for Mordikaar, as the Void Spirits and the Paingiver Bloodrunners both seem to really fit his abilities well.

*Note that I’m going to only count the 35 or 50 point games for my battle total. The Platoon Skirmishes are fun, but much more story than something to reflect in my battles total.

One thought on “Company of Iron Begins”