This past week was week five of the Company of Iron league that I’m running at Drawbridge Games, and clashes are getting heated. I had such a painting binge done for last week (the end of the month) that I didn’t get a chance to add any more to my painting totals. However, I did manage to get a game in this week against Tony’s Trollbloods. We played the Chain of Command special mission from the Company of Iron rules, and Tony was randomly determined to be the defender.

The Trollbloods deployment. The list was Borka with Rok and a Glacier King, plus a max unit of Fennblades with UA, a Fell Caller Hero, and the platoon elements (Stone Scribe Chronicler, Scouts, and min unit of Pyg Bushwhackers). He positioned them ready to leap into the trench. 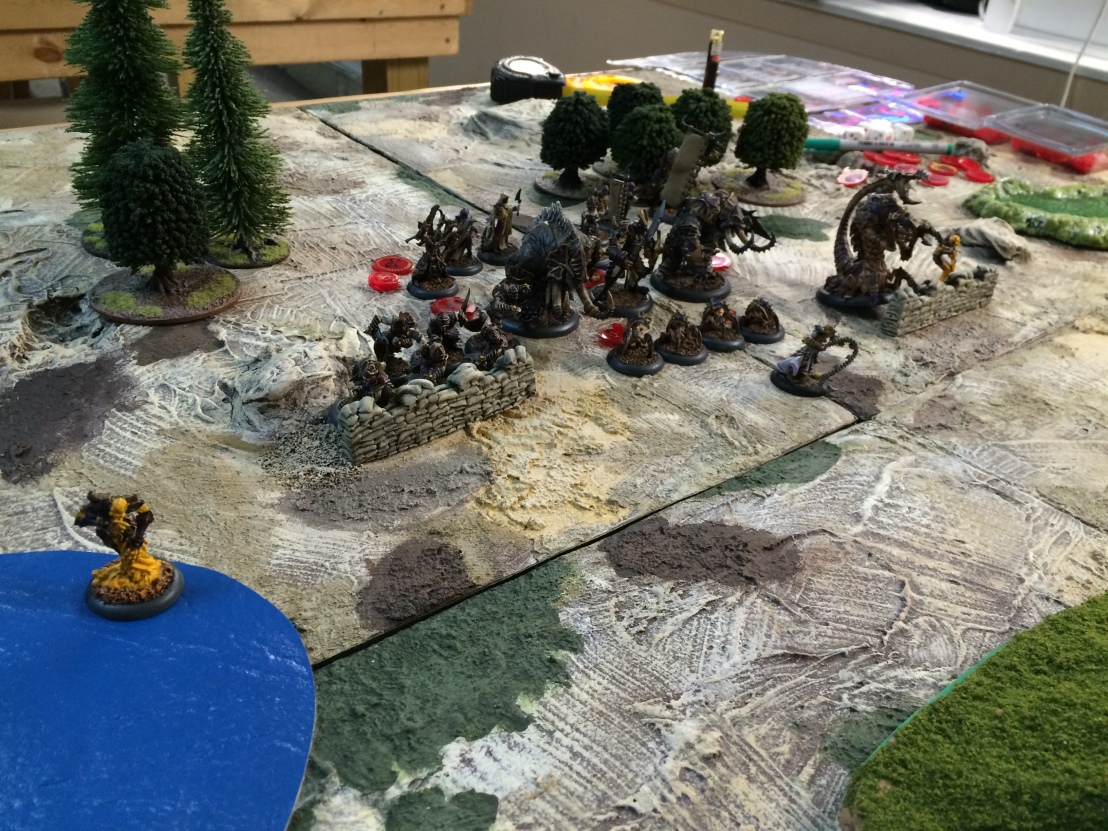 My force was the first outing for Master Ascetic Naaresh under my command. His feat seems to translate well for hitty warbeasts even though he’s a bit of a generalist, so I went for a mostly general battlegroup: a Bronzeback, a Gladiator, a Aradus Sentinel, a Cyclops Brute, a Cyclops Shaman, and my new Scarab Pack hitting the table for the first time themselves. That combined with some Paingiver Beast Handlers and the elements of the platoon to complete the list: a Mortitheurge Willbreaker, a Paingiver Bloodrunner Master Tormentor, a unit of Paingiver Bloodrunners, and two Void Spirits. I rushed up the board in the rough block in the picture above (this is after movement), doing my best to use the two linear obstacles that were provided.

And I needed that cover because of the shooting onslaught. The Glacier King’s deadly shots, plus the spell of the Sorcerer, were directed my way time and again. Luckily the cover, the high defense on some of the models, and the additional armor bonus on the Aradus Sentinel blunted the threat considerably.

The mission makes the attacker (me) win by getting their Warcaster or Warlock into the enemy trench, and then start their following maintenance phase inside. I had a moment of opportunity when the Fennblades panicked from the nearby Void Spirit, so I took my shot. The Paingiver Bloodrunners cleared a model inside the trench then used their ability to draw the model that hit him out of the way. I ran the Cyclops Brute up for protection, and then managed to get Naaresh into the trench with his Cyclone spell. With Iron Flesh upkept upon himself, some damage tokens boosting his armor from a friendly whipping, and the Safeguard Animus from the Brute, he was going to be hard to shift out of place.

That didn’t stop Tony from trying. He had the Fennblades flee away, and basically had a shot from Rok (who got into the trench, so had a chance to hit even my high defense) and then melee from Borka to try and finish Naaresh off. Borka got really close, but not close enough. I took some damage, and had to transfer twice. But in the end Naaresh was still standing in the trench at the start of my Maintenance phase which won me the game.

This mission is probably my second favorite in the Company of Iron set (first being the “Sabotage!” mission for the Platoons), but man it can sneak up on the players. If the attacker goes too slow at the start, the defender can simply string out their force and keep the caster out–even losing in model count they can stay in the game through denial of space. And likewise, if the defender is slow to shore up the position and lets the attacker get a toe hold at the wrong time (with the critical models just too far away on the sides), it can end in a heartbeat. Definitely fun gaming, and a great looking battle against a great opponent is always a joy.