Part three of a continuing project log of my 40k Tau army and their efforts to retain control of the United Systems of Atreidia, against the gradual uprising posed by my buddy Enrico’s Terran, Chaos, and Genestealer Cult forces. Check out part one and part two if you’re inclined.

The Story So Far:

To say that the rhetoric among the citizens of Atreidia was getting violent would be an understatement. Groups of Terran citizens took to the streets to protest Tau occupation, Tau taxation, and Tau development policies. Again, the segments of the city that were in process of being rebuilt after a massive acid typhoon were where the sentiment was strongest, as off-world xenos laborers were being shipped in to take many construction jobs. The Tau tried to explain that the Vespid workers they were employing could better handle the conditions of acid residue labor, but it fell on deaf ears. One popular voice demanded that the Vespid pay for their work privilege, and pay for a full protective shieldwall on that side of town themselves.

That sparked a march in the sector, which drew a variety of people interested in the proceedings. While some were the most virulent of anti-Tau proponents, many others were simply lured in by economic crisis or the sheer charisma of the organizers.

Trouble began when an off-duty Tau Fire Caste Warrior showed up at the protest. Unarmored and unarmed, he nonetheless began yelling back at the crowd and preventing their marching. The situation turned ugly quick, with cries about freedom of speech clashing with his own shouts about how good the Terrans have things under Tau guidance and they should all just go home. It was then that someone in the crowd threw a rock, striking the arguing Tau in the head and knocking him out cold.

Tau military units had been monitoring the protest, suspecting that additional infiltrators from the desert group that was organizing resistance were among them. When a Tau was injured by the crowd, the forces responded with an attempt to disperse the masses. Their DS8 Tactical Support Turrets had been loaded with gas shells, which would launch a ultimately harmless but quite unpleasant plant pollen into the crowds. The stinging itch was calculated to disperse the protesters without causing undue harm. And thus, they fired on the crowd. It was the organized munitions launching into the group that finally turned outrage into pure hatred. The entire crowd surged with a wave of anger. It was the moment that the demagogue amid the crowd was waiting for. He and his followers were in tune with that anger, and savored the crackling energy it released into the air. The ritual sigils from ancient Terran myth that they had smeared on themselves using the blood of desert bovines began to hum with power. In seconds, they were reborn. The demagogue’s robes tore free, and strange brass armor began to grow from his skin. Around him, the faithful were sprouting all manner of change–their muscles enlarging with madness and strange growths protruding from their bodies. They had become possessed by the spirits of pure anger.

With horrifying confidence, the new form of the demagogue waved an arcane pattern in the air, and two pools of energy formed on the city streets. Striding from one nearby were a cadre of strange, armed and armored figured, their armor colored blood red. The far one shimmered and beings exited as well, but the distance of their arrival and strange, cloven-footed forms had trouble being recorded on Tau viewscreens.

With screams of panic, the protesters abandoned their signs and fled for their lives. Judging the new arrivals to be a threat, simply because of their mad dash at the Tau lines, the Tau security forces opened fire. The fleeing protesters were struck by errant bullets from the Tau, but those protesters that neared any of the new arrivals’ positions met and equally grisly fate as they lashed out indiscriminately at all life near them.

The Tau used what redeploying methods they could to buy more time against the onslaught–the Breacher team that took cover in their Devilfish emerged again to deliver a close proximity burst at the armored foes. Yet their numbers were small, and the Devilfish and Piranha that were helping patrol the sector didn’t carry the kind of ordinance needed to repel such desperate foes.

The distant creatures that had arrived finally made it to the Tau lines, and the Ethereal Commander Lisbet W’ren looked on at the strange alien race that seemed to be working with these Terrans. They had cruel hooves for feet, strange elongated heads, red blistered skin, and carried wicked blackish swords. Ethereal Commander Lisbet had never seen such creatures, despite contributing to over thirteen colonization missions personally. Their deadly strikes made short work of the nearby drones.

Pressed between the jaws of two forces, Commander Lisbet tried a desperate gamble. She rushed forward to try and stop the threat of the warped demagogue with her own honor blade. While she managed to fend him off for a bit, his deadly strength proved too much for her under-armored form. She fled on foot, with small drops of blue blood littering the path she took as she ran. She glanced back, seeing that every one of her Fire Warriors had fallen in brave service–only the crews of the vehicles had survived besides herself. 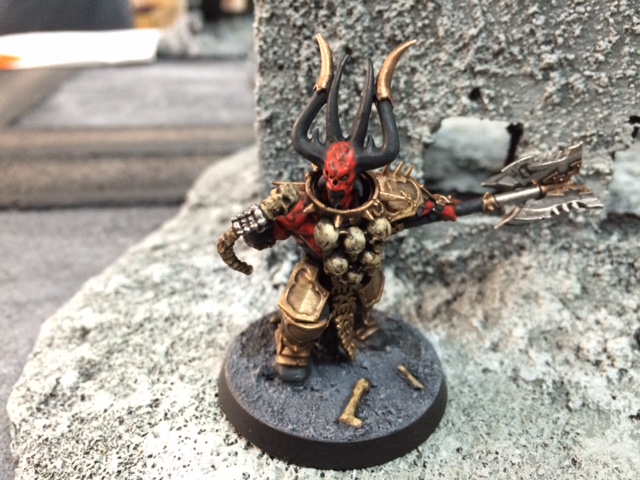 As the Tau fled, the demagogue climbed up a structure. The portable microphone and amplifier he had been using when in the crowd was now strangely fused to his new body. He lifted the skull-shaped microphone to his mouth, and his shout reverberated around the entire sector. “I am Olim Yia, prophet of what is to come. Join us Terrans. Resist the Tau and embrace what is fundamental to your nature, what ancient power runs in your blood. Embrace your true Terran feelings of hatred and anger. The Tau do not understand them with their alien fishbrains. It’s what sets us apart, and through our natures we can become strong. Join me, join us, join the great spirit of Khorne that lurks in every Terran’s soul. You can feel him there, calling you even now. Give in, and we can ‘Make Atreidia Great Again!'”

Thus was born the first of the revealed prophets, Olim Yia, the Maw of Rage.

Like I mentioned last time, my goal was to at least have a force org chart filled. So a Breacher Squad, an Ethereal, a Piranha, and two DS8 turrets were what I focused on to get there. A very small force (around 450 points) but still enough for a regular game.

The Tau Ethereal I added is a resin model from Wargame Exclusive, a company from the Ukraine (at least that’s where it was shipped from) that does creative sculpts of various models in the 40k universe that don’t have models created by GW (such as Tau models with some persona and character to them, including female Tau). I really liked a number of their models, and while some are a little cheesecake, I figured that the diversity in the model would look really nice amidst the army–and I think it came together nicely.

Finally, I’m really proud of the look of the Tau Piranha that I finished up, so I couldn’t resist a close up (there wasn’t one in the “footage”, as it mostly swooped around and missed its shots).

For the battle itself, we used a limited number of turns plus HQ kill as the deciding factor. In addition, we built up rules for the fleeing members of the demonstration group: missed ranged hits by Tau would potentially kill them, while missed melee strikes from Khorne models may kill them. Whichever side killed the most civilians would get the worse of things in the “press”–and sadly the Tau missed more shots and thus contributed to more injured or dead overall.