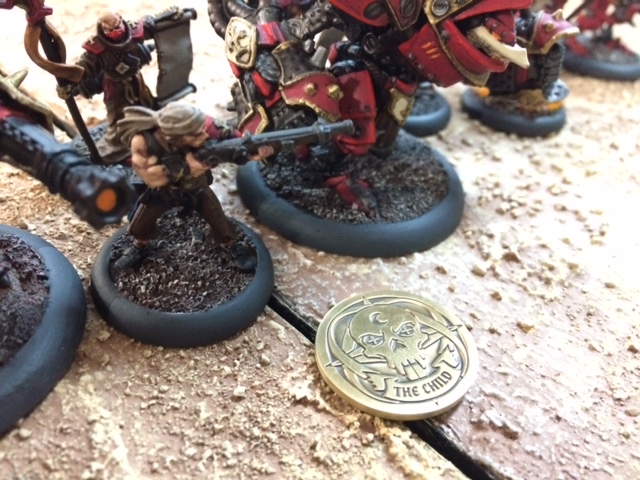 Since my last post I’ve had a whirlwind of 30 points of painting and twelve games of Warmachine and Hordes. And all of it Protectorate of Menoth. I think I’ve got a problem. 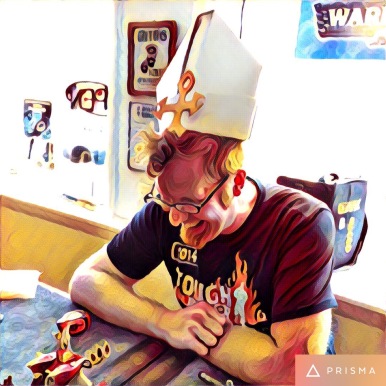 I’ve been really enjoying the force, even though I’m really slow at painting it (I’m so tempted to go back to Trollbloods which I paint fast or Skorne with which I have a simple scheme). But I’m still making progress: I finished a new Warcaster and two Warjacks for my force.

Feora2, Protector of the Flame. I really like how she turned out, and while assembling I was annoyed by her model I really like it now that I’ve gotten it completed. 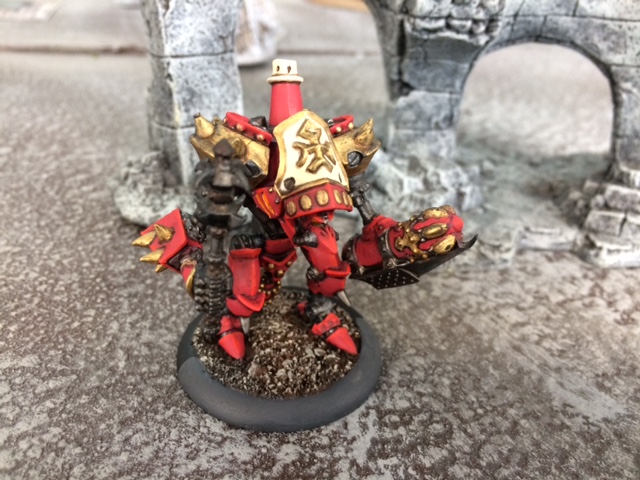 Redeemer light warjack. With Feora2’s Firestarter spell, this model seemed to be the obvious must-add for my army list.

This post also marks the completion of our first season of the Crossroads of Courage campaign that Privateer Press has been putting on. I played in every week and was pretty successful overall as a Sower. I got an awesome campaign coin for playing in the games.

Though I never once got this result in the four weeks. It was four straight weeks of Coward for my Holden the Last.

On the gaming side, I fielded my Protectorate in a local Steamroller, played a heap of Crossroads of Courage games, and had a one-off game with my buddy Michael who is making leaps and bounds progress on his Trollbloods force.

First up: the Steamroller. It was a pretty small event, and I went 1-2 overall. That said, I had some really fun games. My pairing was Kreoss and Amon Ad-Raza. With Kreoss, I ran a warjack shooting-focused list using a Judicator as a central pivot and the threat of Kreoss’ feat. With Amon, I had a Warjack heavy list to capitalize on his Mobility spell and deep-range assassination runs.

First round I was paired against Dave’s Legion of Everblight force, led by Rhyas. I was doing well in attrition, and had eliminated every one of his warbeasts. Sadly, the Devout stood in the woods rather than behind it with Kreoss, and Rhyas’ feat let her warp to just the right spot to promptly chop of Kreoss’ head with a critical decapitation.

Second round I faced off against Little Larry’s Minions army, with Rask as his warlock. He bricked up, which meant that my template shooting was murderous on his cluster of heavies and Rask. With his Bog Trogs flanking rather than staying to protect Rask, he ran out of Fury too fast over two rounds of shooting and I managed to assassinate him. 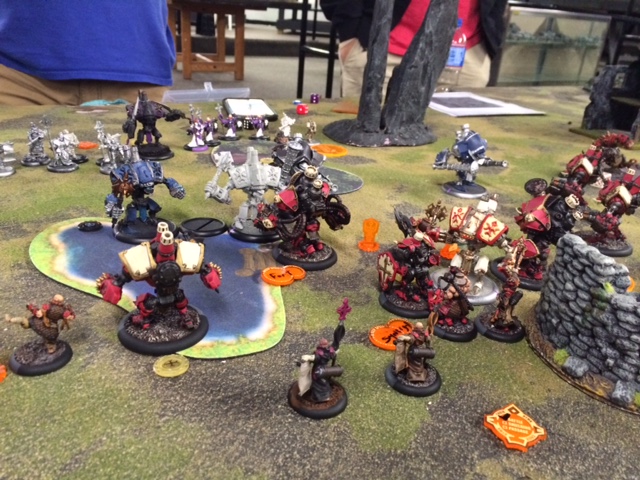 Third round was another close game, this time against Jay’s Protectorate of Menoth force. He ran Amon Ad-Raza, and I ran Amon Ad-Raza. It was an Ad-Raz-off! I made two blunders that cost me the game ultimately. The lesser one was forgetting the rules of his objective (passing damage to nearby warjacks), which left my shooting Warjacks strung out with little impact. The greater one was inexcusable: denoting just how far Amon can get a warjack into the mix. He had to trample to do so (as I managed to get a Monk in the way when I realized my mistake), but with the Synergy chain Amon’s high defense wasn’t high enough and the Crusader mashed him.

All-in-all a great set of games and a good time with all three opponents. I’m still getting the handle of competitive list-building for Protectorate, so playing against a mirror in the third match was particularly useful for my thinking.

Next up, I played more than a few Crossroads of Courage games over a couple of weeks’ span: 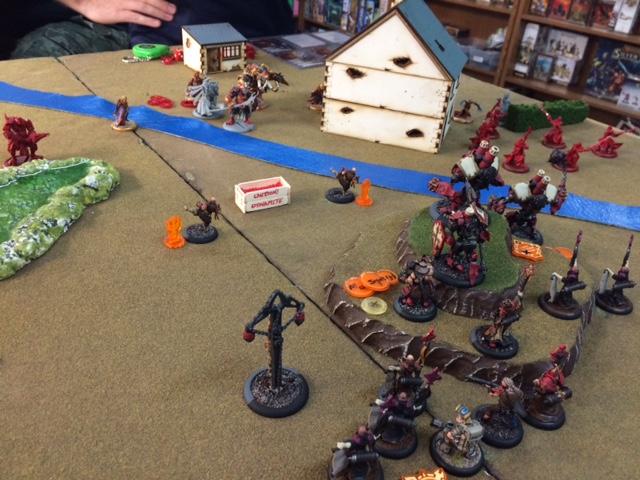 My Amon Ad-Raza helped escort Old Jeb to a mine entrance past Brad’s Skorne led by Xerxis. 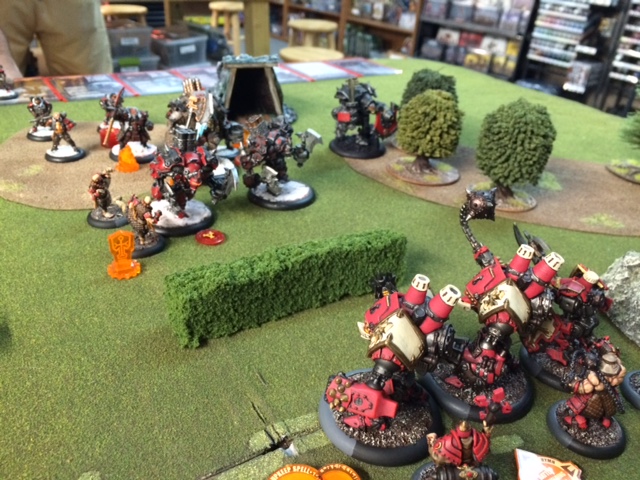 A second Old Jeb escort mission. This time against Colton’s Butcher and his warjack-heavy Khador force. 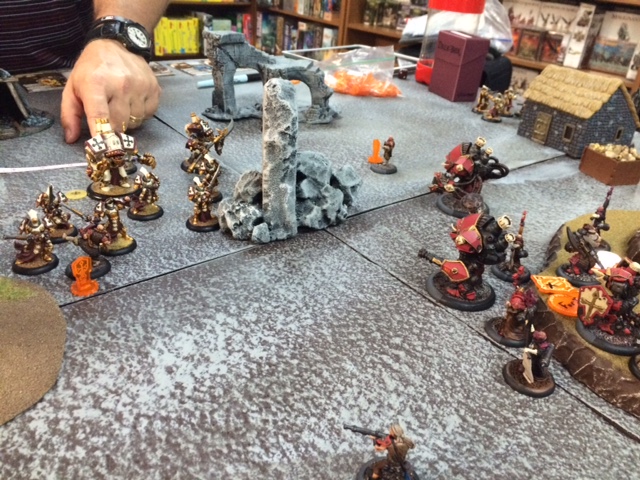 We called them training exercises when my Protectorate clashed against Terry’s. Reznik wasn’t ready for how far a Reckoner could get with Mobility, and I managed the assassination. 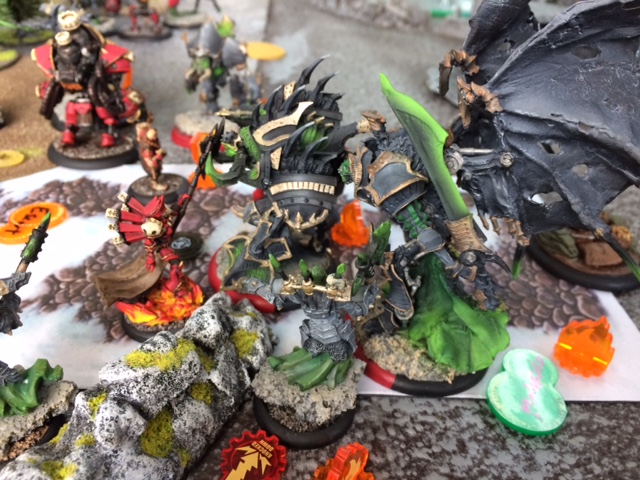 My first outing with Feora2 was against Ryan’s Cryx and Terminus. I got so close to killing him… needed a 7 or more on the fire roll at the top of his turn to win. I rolled a 6. And was promptly slain in retaliation.

The burning ash hazards made for an interesting messenger battlefield as my Feora2 force took on Colton’s Sorscha2. Fire triumphed, mainly by Feora’s Feat giving the messenger a burning sensation by transferring the continuous fire to the model.

For the first time ever, I managed to assassinate pHaley. I’ve played her countless times in my gaming career, and she’s been something akin to my Achilles heel. All it took was Andy fielding her for the very first time with his brand new (and awesome) wasteland-themed Cygnar force. Curse of the newly painted model and someone fielding her for the first time? Doesn’t matter. Streak broken!

My Holden the Last ducks near a crate of dynamite as Roger’s marauding Circle warbeasts close in on the Protectorate battle line.

After a protracted battle against Ryan’s Cryx, led by Captain Aiakos, my force hunkered down enough to eek out a victory by scenario points. It took Feora standing up to an attack from Barathrum, which she barely survived.

Finally, I got in a game against my friend Michael who is slowly getting into the game.

Look at those beautiful, classic-scheme Trollbloods models. I managed to win by assassination,  but Mulg had smashed his way through anything in my force that was a threat to him by then… had I not succeeded, Feora2 would have been a red stain on his big club.