My main gaming lately has been the homebrew campaign that I’m running at Drawbridge Games here in Pittsburgh, PA, which has taken on a life of its own. I’ve been fiddling with all sorts of factions as part of it, working with whichever sides need more assistance in getting onto the map. Thus, my painting over the last few weeks includes some for each of my armies. After that, I’ll talk about the games I’ve gotten in lately.

Dire Troll Mauler. Yeah, this guy is an absolute monster in Mark III. Had to add one to my force, and I really like how he turned out. 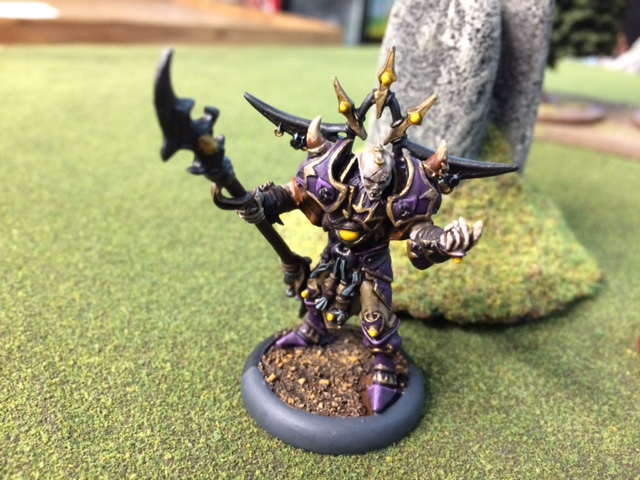 Lord Tyrant Hexeris. Really pleased with the model, even if his rules leave something to be desired. 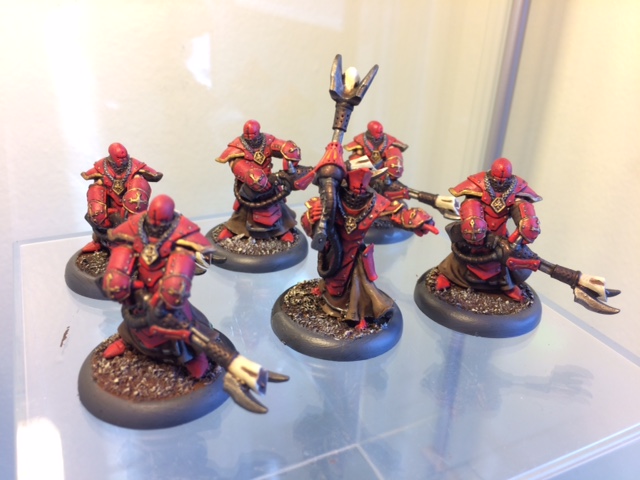 Finally, I added a minimum unit of Flameguard Cleansers (forgot to take a pic on the gaming table, so one on the shelf will have to do). For some reason infantry take me soooooo long to paint.

On the gaming side, I got in a heap of games recently against a variety of different players and factions. I’ll dive right in: 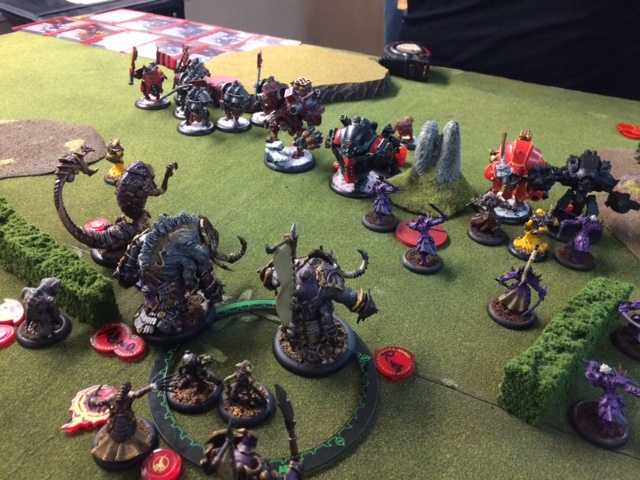 Since my last update, I started with some Skorne. Having finished Hexeris1, I had the idea of a pairing with him to be anti-infantry and Morghoul1 as an armor-cracking/counter-punch list against heavy spam. My first game was against Kommander Harkevich and a whole heap of Khador warjacks, so Morghoul1 it was. His feat really helps Skorne heavies survive the initial attack, and then answer back. I got to the point where too much was able to get in on Harkevich (two void spirits and an Aradus), and managed the assassination. 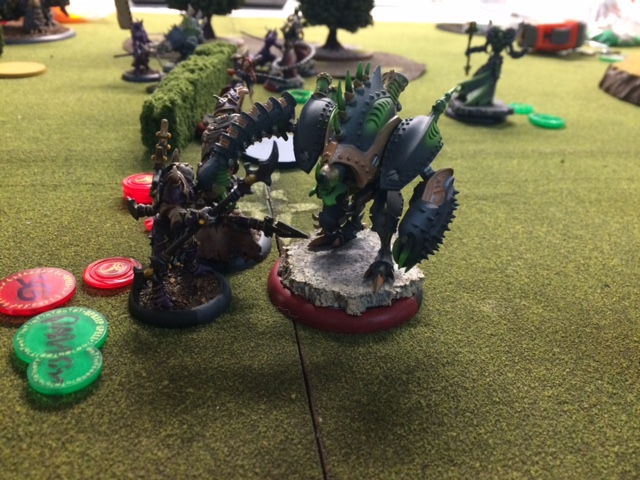 My other game was against Asphyxious1, and there were enough troops that I took Hexy1 for a spin. He was… less than impressive. I’m not sure which types of troops are best for him and his feat. Satyxis Raiders proved to have too high a DEF value to hit each other in melee, making my feat turn quite lackluster. I got caught having to catch up, which meant an over-extended Hexy1 and an assassination against me.

Onward to some Trollbloods. I swapped to them mainly to balance out the sides in the campaign we’re up to, and started out with a Doomy2 loss to Andy’s Sturm and Drang. I played a lot of Doomy2 at the end of Mark II, so he was easy to plop on the table for a game to give it a go. My wall of heavies got close to sealing the deal, but I ended up losing after not quite getting an assassination. There was no way I was going to stay in the game when it came to scenario, so I had to make my move. My list needed a few more troops to really make it work. 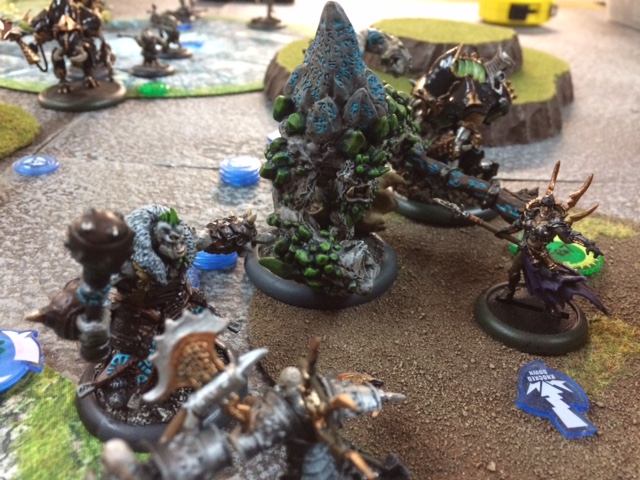 I followed that game with a match using Borka, against Scott’s Deneghra1 and Cryx force. He’s a newer player who has gotten good ahead of the curve, but the classic “understood that Borka is hard to assassinate but didn’t realize just how hard” problem manifested itself, and Mulg was able to get into Denny and finish her off in the turn after she went for it against him. Borka may be my favorite of the Trollbloods casters, as I simply love his dare: “go ahead and try, I’m right out front”. 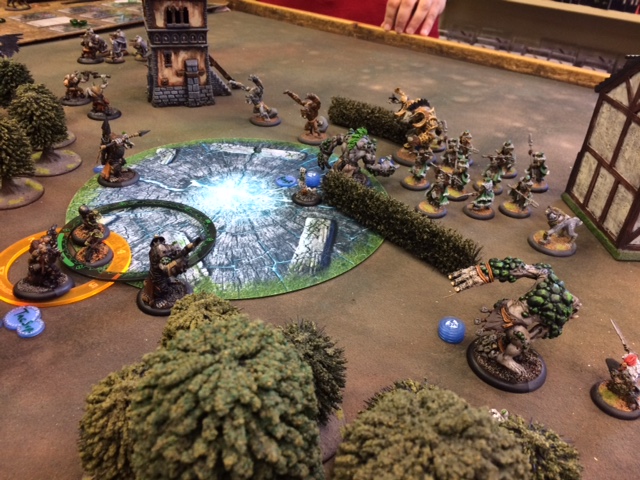 Had an old friend, Charles, who used to play Warmachine and Hordes reach out and say that he was returning to the game and wanted to get a match in–so I jumped at the chance. Faced off against his Grayle list with my Jarl force. Mauler smash-and-grab was the name of the game, managing to cripple his Satyr and knock down Grayle with the throw. Thanks to Fury issues, and some lucky misses, the Mauler survived the retribution. Snacking down a few whelps, he then rocked into Grayle and finished him off. Was a great game, and Charles’ stuff is beautifully painted so always a joy to face.

I’ve been bugging my buddy Ryan to finish up his Deneghra3 model ever since it took flight when he was bringing it on a windy day last year (the wind legit lifted the model off the top of his case and crashed it to the street, breaking it). He finally finished her up, so we nabbed a couple of matches as I was keen to face her. The first game I took my Protectorate and Amon Ad-Raza. Scenario was the Pit, so it was somewhat of a dead letter due to positioning. I almost got her assassinated, but came up just short. Having to trample to get there rather than charge hurts, and Amon’s feat still doesn’t fill up warjacks particularly well. Ryan managed to get a functional warjack onto Amon thanks to Ghost Walk, and that was a game. 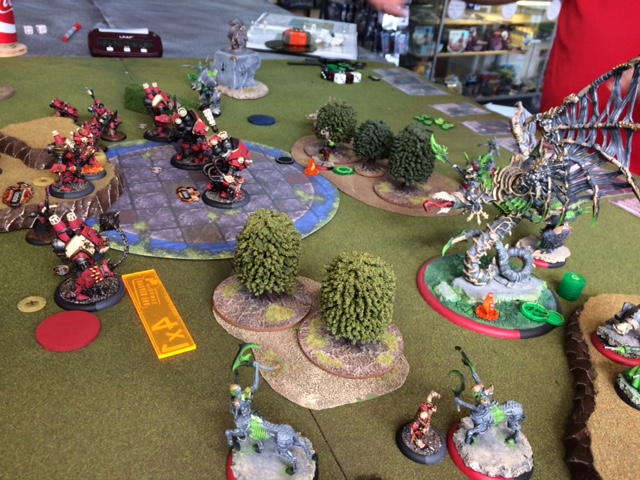 The second game I fielded Feora2, as I wanted to have my painted Flameguard Cleansers on the table. I managed a win over Deneghra3 this time, in large part because lighting my own jack wall on fire with Cleansers then swapping it over to key enemy models is just awesome. The kill came down to the continuous fire. Always my favorite type of assassination… wait, no it’s AWFUL to win that way. Shouldn’t go in if I need to get lucky to finish the job. Great game as always with Ryan, and it was fun to see Denny3 hit the table.