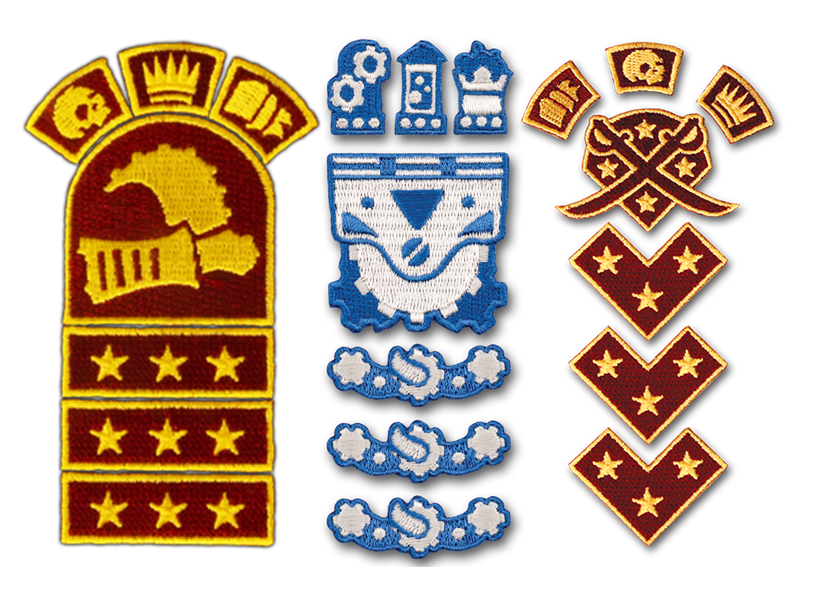 Our local Crossbones Crew gaming club kicked off 2017 with a bang: a Journeyman League. All the details on the league can be found here, and this page will track the League standings and feature pictures of the clashes and painting progress. Players shouldn’t be disheartened if they’re not in first place: remember that you get the full starter design patch and three bars for getting a game in all six weeks, whether you win or lose.

Skorne started strong and remained strong in the event, with both Brad and Ryan finishing at 3 total Destroyer points. Adam was the third who managed to net three, with his Gaspy1-led Cryx. Andy and I each earned two Destroyer points, with Andy playing the role of spoiler in the final week: none of the leaders managed to beat his final week record, so they split at three–meaning that we had to run a tie-break championship event. Kevin also managed to sneak in a Destroyer point in an early week to reach the upper standings.

All told, we saw 74 games of Warmachine and Hordes played during the event over all six weeks. It was a great Journeyman league, and people really stepped up their play and their painting for this one.

When looking at the standings, remember that as a Journeyman things are a bit different: so best record is first destroyer points, then wins, and then third total games (rather than ratio of wins to losses as would be usual). Better to play a bunch and lose than not play at all!

* As the event organizer, my standings don’t really count as I don’t win prizes.

I missed a fair number of photo opportunities in the madness of getting all 14 players signed up and set up for the games. But we had a full house, and everyone is excited about the fact that Drawbridge Games will be nearly tripling their amount of gaming space starting in February. 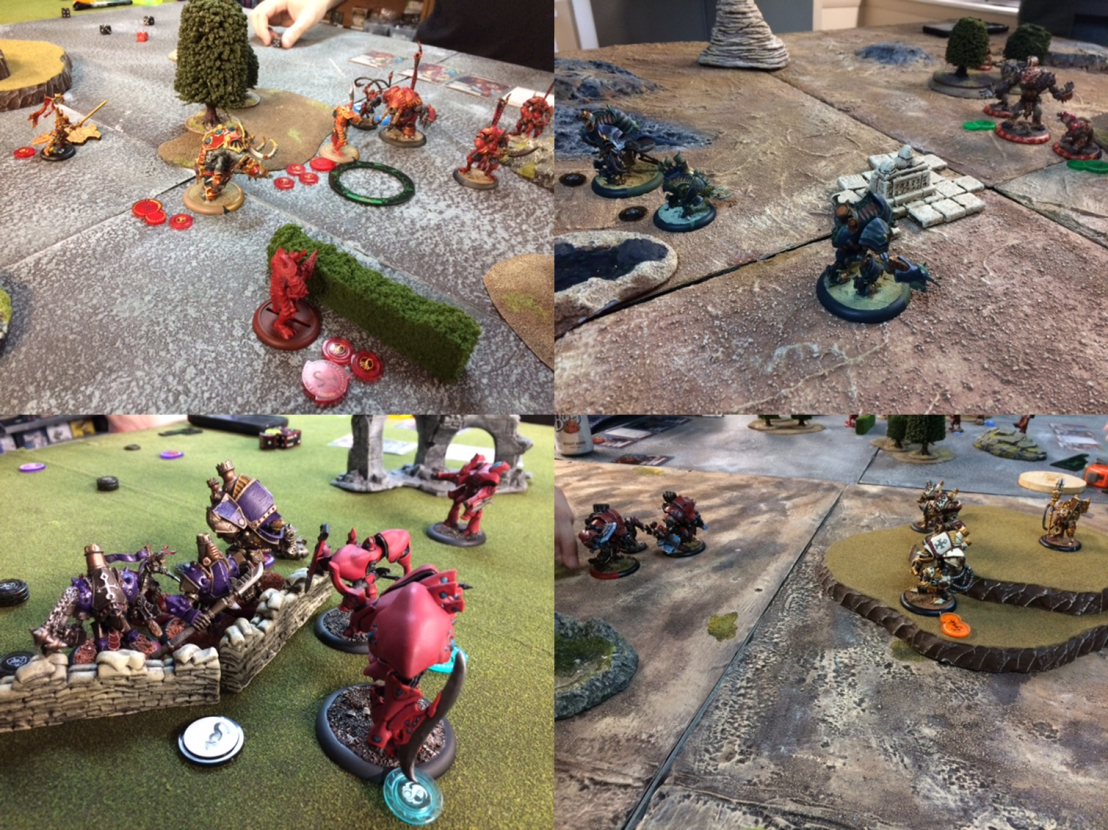 Some of the pictures I did get of games. Clockwise from top-left. War of the Skorne between Brad and Ryan. Adam’s Cryx move in against Kevin’s desert-themed Circle Orboros force. Andy’s Khador brick pushes toward Terry’s defensively-postured Protectorate on a hill. Tom’s great purple-scheme Protectorate man the walls against my Retribution.

Didn’t get as many shots of the games this first week, but I got one of FOUR games going on at once. Heated warfare across the Iron Kingdoms! Everyone is concentrating except for Brad–I guess when you go undefeated for the day you can mug for the camera.

Clashes continued as Battlegroups expanded in all sorts of ways. Andy’s war-worn Khador trade blows across a stone wall with Gary’s sleek Cygnar. Tom’s Protectorate deal with the pain that is Admonition on Kevin’s heavy Warpwolf. Adam’s Asphyxious plays keep-away with the onrushing Skorne forces of Brad. Dana’s Protectorate get in a shooting match from the trench system with Colton’s Khador. Joe’s amazing addition for week 2, a Pyre troll smashing through a tree, gets into the face of Adam’s Cryx. Dana’s friend is fire as his Protectorate sears the paint from Gary’s Cygnar. Scott’s Cygnar grind a long game against Steve’s Retribution. And Ryan’s Skorne watch carefully for Brandon’s Legion creeping through the treeline.

Troops arrive on the scene, making the battles a bit more varied!

Ryan’s Xekaar faces Kyle’s mighty Deneghra3, and manages to assassinate her. Kevin’s Circle found the path through Elara2’s defenses to victory. It was a battle of Red-on-Red as Ryan’s Skorne managed to triumph over Andy’s Khador. And the Pirate Fleet arrived in force as Adam’s Cryx took the fight to Steve’s Retribution.

Kevin’s Warpwolf slips away from Joe’s Dire Troll Mauler thanks to Admonition. Adam’s Gaspy1 makes his heroic last stand in the face of Andy’s Khadorian might. Scott’s Cygnar face the rush of Brad’s Nihilators. Kyle’s Deneghra3 towers over the battlefield as Brad’s Skorne press forward.

The fight was on as lists really fleshed out. Almost everyone added some measure of troops by this point, and some people opted for Warcaster and Warlock changes this week.

Steve’s Retribution manage to weather the storm against Andy’s brick of Strakov-led warjack fury. Adam’s Reaper goes toe-to-toe with Scott’s light warjack. It was a clash of Cryx-on-Cryx as Kyle’s Deneghra3 squared off against Adam’s Gaspy1: “Now, the Student will become the Master!” And Joe’s Trollbloods, led by Borka1, duked it out against my Retribution force. 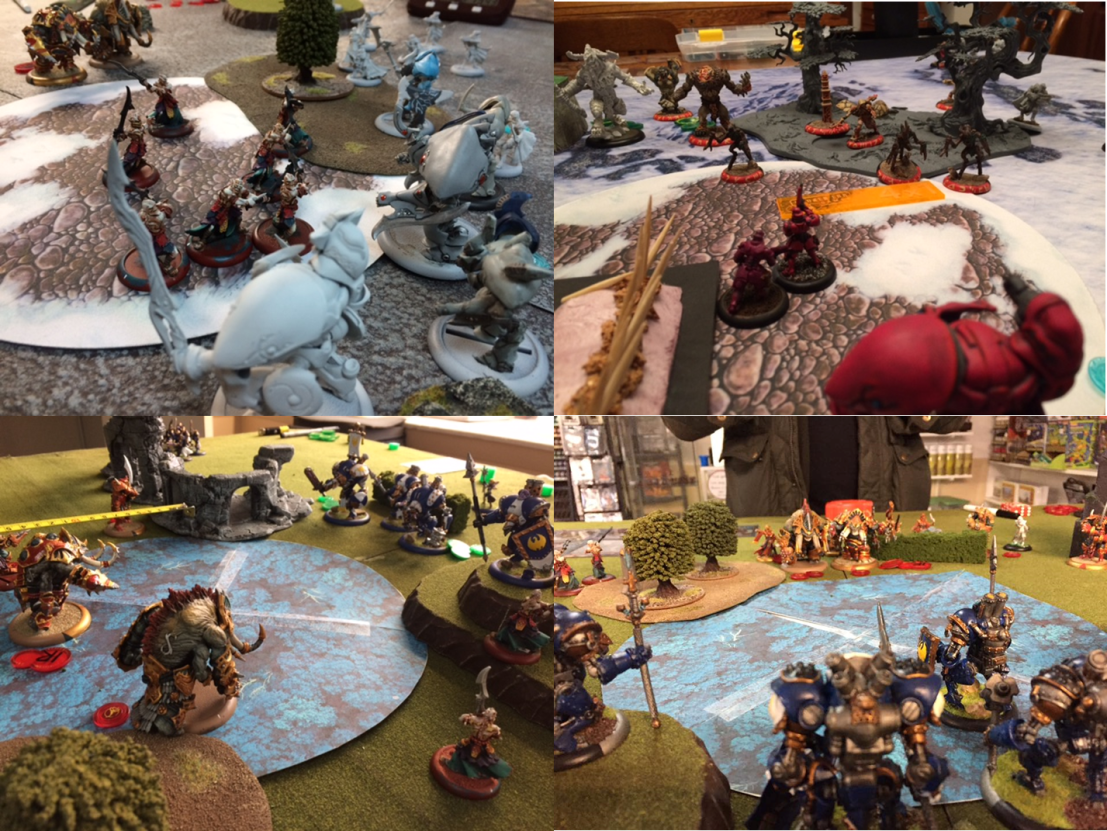 More and more Retribution and Skorne action this week. Steve’s Retribution managed to stop the advance of Brad’s Skorne, while my Retribution took out Kevin’s Circle Warlock, Tanith. Brad then got in a double-header on Sunday against two different Cygnar players. First (on the left of the image above, rather than clockwise) he faced Scott’s Cygnar, then Gary’s Cygnar. He managed to get a win in both, but Adam and I still ended the week as the top scorers overall.

Games got a bit less frequent as they start taking just that little bit longer at this points value (closer to two hours rather than one). Still, ample clashes to observe! Week six was for all the marbles, when people brought out all the stops in their lists.

Steve’s lone Chimera faced down the entirety of Adam’s Cryx. Ryan’s Ferox cavalry manage to put out Joe’s Fire Eaters. Adam’s Satyxis Gunslingers take out Andy’s converted ash-wastes Kazazy Assassins. And Joe’s force fought hard, but couldn’t stop Ryan’s Bronzeback from reaching the objective. What the elephant will do with all those sacks of potatoes is anyone’s guess, but it won Ryan the game.

I wanted to make a separate space to recognize all the players who fielded a fully-painted force through the entire event. I need to get a couple more shots to complete things, but the first two were Joe’s Trollbloods (which won the Best Painted award for the league) and Ryan’s Skorne.

I love the snowy basing and the fire effects. Great stuff! This force won the Best Painted award, and was very deserving of the recognition chosen by the players (via vote).