Okay, so I’ve played Skorne for a long, long time. And despite always moving on, it seems that I always come back to it. This time it was two things. One, some friends getting fired up about doing a joint Skorne project together. And two, finding a painting scheme that I liked for my Immortals and Ancestral Guardians units. So it meant some change in what I’m painting (tho with Zaal1, I refined some of my purple painting and I’m relatively pleased there too). I also got a few games in with the Skorne to shake the rust off, and the new Errata has pleased me a great deal. It seems like around this time last year I was fooling around with Hexy1, so it was a nice thing to drop right back into him with added improvements. I also got Zaal1 painted up so I can start to give him a go (need one more unit of Immortals finished to run him, I’m thinking). 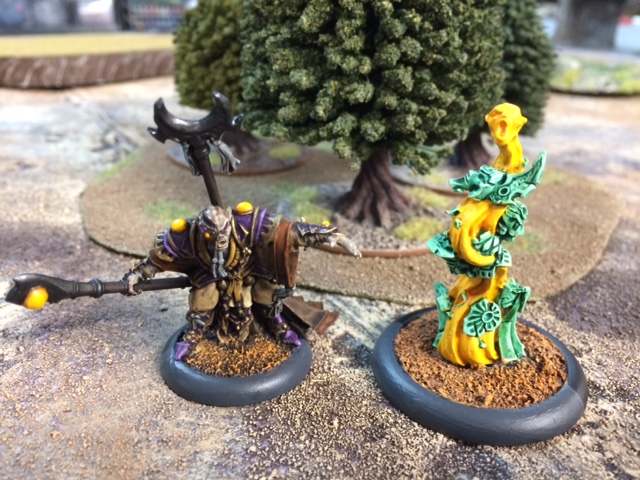 I’m really liking the way these two show all the colors of my force at once. Yellow for magic/soul energy, purple armor, mixed brown-to-yellow robes with pale blue cording, and jade statues.

Hakaar the Destroyer. I like the model a ton, but I’m still somewhat meh on him without the right list (Zaal2 I’m guessing). 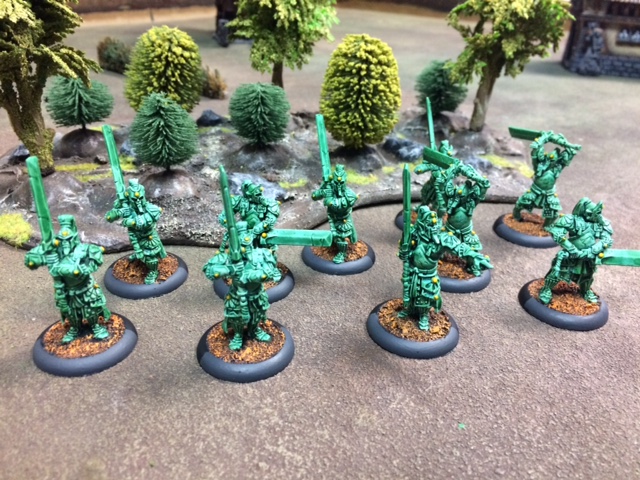 The Jade Immortals themselves. I really like the way they turned out.

On the gaming side, I managed to get in three games. All of them with Hexeris1, as I wanted to try out his changed-up abilities. I’m loving Parasite with Skorne, and the fact that he upkeeps one spell for free is a big deal in his spell-slinging ability. And as always, his feat was HUGE when it was huge, and terribad when used at the wrong time/against the wrong foe. Ah, good to see he hasn’t changed too much.

First game was versus Steve’s Retribution force. Against Dawnguard, Hexy1’s feat was great. Took out an entire unit with a single shot from a Cyclops Raider to start the chain. I’ll take it! Managed to swarm the shooting elements with Immortals, as Krea-boosted ARM 20 on the approach is tough to stop. That let Hexy1 get a Gun Bug into melee with the objective to win the match. Bonus shout-out to Steve for the great looking Chimera model. 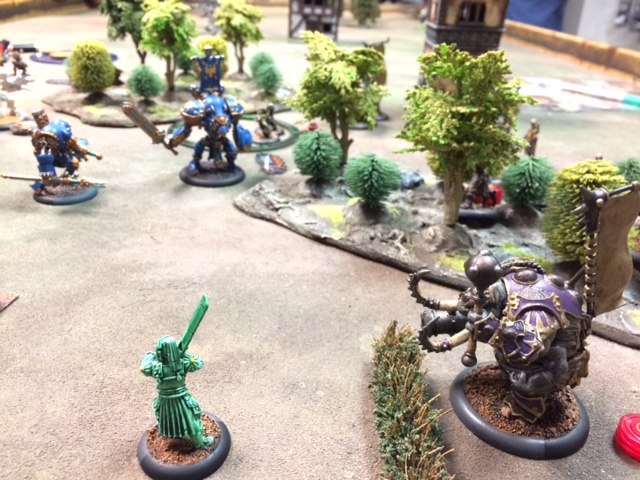 Second game was against Michael’s lovely Cygnar force. He fielded Nemo3 in theme, while I took a bit more shooty of a package with Hexy1. Again, the Feat turn worked. Took out his whole unit of Stormblade Infantry, though it took a lot more of my models to keep the chain running. The game was still close, as his Warjacks were pressing hard on my weak side. I managed to get an opening to put Parasite on Nemo3 when he had no focus. Even though only two Bloodrunners actually got to him, their Death March MAT 9 charges with Gang were enough to finish him off. Great game, and now another player will not fall for Hexy1’s shenanigans again. That’s my main worry with him–once an opponent really knows, they can take more care with their clusters and spacing and minimize an already kinda-clunky Feat.

Third game was against Brad’s Skorne. Time for a Skorne-off! He fielded Zaadesh2. Honestly, I should have lost this game–so I’ll only credit luck on my part and food poisoning on Brad’s. He was way ahead on attrition, but Hexy1 managed to get to the objective himself and cap the game for the win solo-style. Swarm (from the Aradus Sentinel) is a great animus. The lesson of this game, tho, was that Hexy1 vs. Tough troops is bad, bad news. Not only do they tend to survive, but you cannot kill them after knocked down–as they cannot make the advance or swing if knocked down. Too many chances for an opponent to get lucky and stop the Feat train.