Game on, game on. This post has a whole heap of Skorne games with my growing Immortals collection, plus some silly Convergence experimentation.

On the painting side of things, I’ve just not been feeling my Retribution force. I love the color scheme when it’s done, but getting the red tones right is laborious. So I decided to just dabble a little with yet another Warmachine faction: Convergence of Cyriss. Yeah, I know. I should focus on one faction (Skorne) or just stick with Retribution. 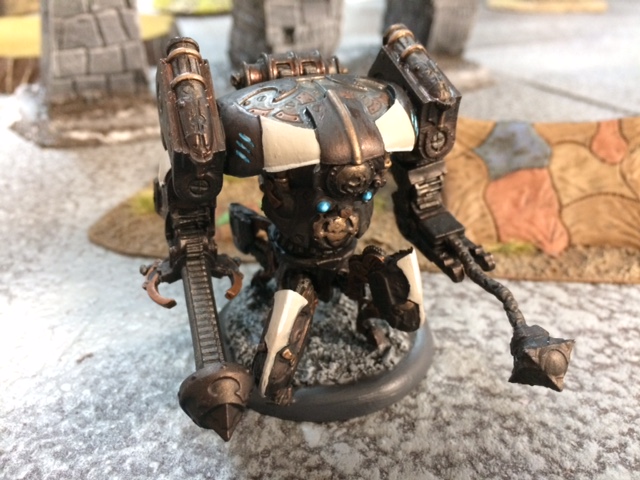 I started with an Inverter, as it seemed like the ubiquitous choice for both the game and practicing painting. After a first attempt that I greatly misliked, I moved to this scheme which I am much more pleased with.

I also finished up Father Lucant for my Convergence of Cyriss. I’m particularly pleased with how he turned out. I’m liking the ceramic-looking select plates, and the light blue of the robes isn’t too off-putting (that’s the bit I struggled with the most). I’m working on the glow effects, and the one on the top of his staff is the one that I’m most proud of so far.

I also painted up another unit of Immortals for my Skorne army. They’re on the left, meeting the first unit I completed on the right.

I traveled during the start of March, so I was a bit slow on games at the start of this month. Managed to sneak a few in though, and then the floodgate opened as I got a bunch in all right in a row. 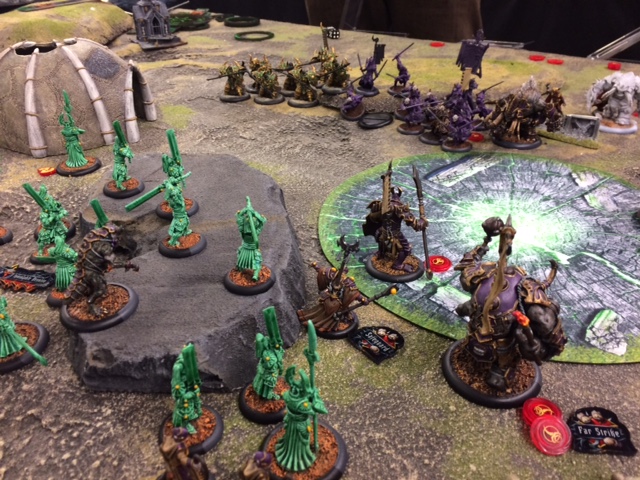 Started out with a Skorne vs. Skorne match-up against Kevin. He fielded Makeda1, while I tested out my first draft of a Zaal1 list. I survived a pretty good assassination attempt, and managed to get four Last Stand-buffed charging Immortals onto Makeda1 during feat turn. The boosts to hit were enough to connect, and despite transfers managed to knock her out. Her self-harm on her own feat turn helped a great deal. It was a very close match and a great learning experience about how Zaal1 runs (and how Exalted models trip all over each other if I’m not careful).

My initial attempt at Zaal1 hit the field again, against Ryan’s… Skorne… using Makeda1. A little bit of deja vu, but different options change the battle considerably. The big object in the middle of the battlefield had two arches, but charging would have to be straight thru because of size and angles. That lead to a bit of round-robin, and Ryan’s swordsmen started out of place and facing incorporeal solos which proved to be the definite edge I needed.

The game was the Crossroads of Courage Season 3 Week 3 scenario, with teleporting circles. There was a bonus for having your warcaster/warlock in them with an assassination, so I actually had to have Zaal1 go for it to seal the deal. The rest of the army killed Makeda’s transfer targets, and he teleported to the ring. Casting Last Stand on myself meant that I needed to succeed or I’d lose my caster (for those unfamiliar: any model that attacks under Last Stand is destroyed at the end of the turn). Took a few swings with my puny weapon, but managed to finish her off.

My next game was against Andy’s Mercenaries, led by Drake MacBain. I took Zaal1 again. This time I got into a bad situation on attrition, but was able to use incorporeal to my benefit even in the face of MacBain’s ugly feat. Thanks to the Feat turn, the soul-loaded Kovass got the job done with assassination.

Following that, I faced Ryan’s Venethrax list. And the exact opposite of what won me the game against Andy happened. I got into the spot where I was ahead on attrition that he took a chance on assassination and managed to kill Zaal1.

Still more Zaal1, this one against Charles’ Circle Orboros army led by Grayle. This one was right down to the wire, but I managed to pull out the assassination victory. You know it’s bad when you’re counting on the Titan Cannoneer to hold one side against melee infantry.

Onward to the weekend, where I played… Zaal1 again. Heh. This time I faced off against Larry IV’s Circle army, led by Kaya3. He wasn’t ready for how destructive my Immortals can be with Last Stand, so it went my way pretty fast. I definitely want a re-match at some point when he knows my list a little better and has more experience with Kaya3.

Following that match, I faced Larry III’s Skorne force in a grand Skorne-off. He had Makeda2 and Xerxis1 as options, and I was reasonably certain he’d be bringing Makeda2. Because neither list I brought had an answer. I decided to drop Hexy2, which wasn’t a particularly good plan. It didn’t help that I came up short on what could have been a more aggressive play. He definitely had the upper hand in the game, and finally finished off Hexy2. While I’m okay with Zaal1, I definitely need a pairing for him that isn’t Hexy2.

Final game of this cycle, I broke down and put mostly unpainted Convergence of Cyriss onto the table. I have been trying to play as fully painted as possible, but in some discussions people said that I paint fast enough that I should just play what I want–and let my play drive my painting passion. So it was time for Lucant to strike out against foes.

I faced Ryan’s Venethrax list with some heavy modifications from the last time I clashed. I got on a bad start from the beginning as I didn’t have the ability to land things close enough to deny him points on the friendly flag. I was ahead in attrition, but time and score conspired to make me have to get too aggressive with Lucant. He rumbled up and did a great job against a sea of Warjacks (notching four total if my memory count is correct–two heavies and two bonejacks), but his urge to get up left him too easy prey for Venethrax who ended things with a charge of his own. I was honestly just glad to get a little table time with my Convergence. As I’m planning on doing some silly things with them going forward, and their induction system for Focus is a little wonky.

It’s been a while, but I finally got a chance to get in some Bolt Action again. I’ve so far shown my Italians here, but this time my Japanese took the field. They’re still a little rough in the paint department–something I’m hoping to get into shape soon. But I wanted to show off the fun game anyhow.

I mainly wanted to show off the great table that Ryan has started. He’s got many more plans for adding Pacific elements to it for our clashes. We’re also plotting an extensive Guadalcanal series of games to structure our ongoing play.

This Japanese solider is the completed look of what most of my uniforms will be. I’m actually doing a Nomonhan force, not a pacific island force, but they’ll be fine for the purposes of our games. Here he’s sneaking around the jungle treeline to strike at the Marines command taking cover behind the fence. 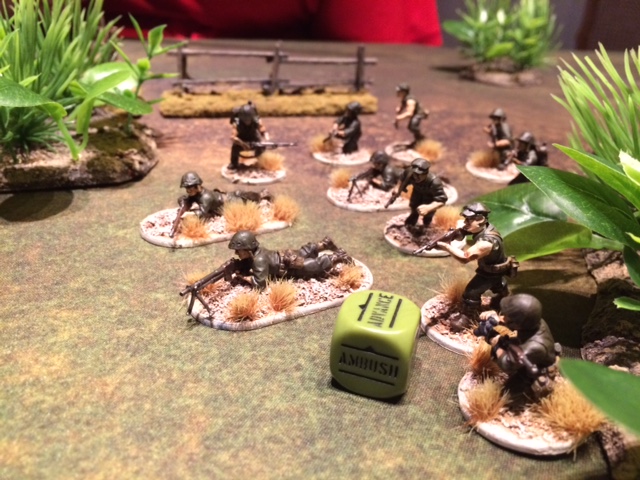 Ryan’s Marines are in better shape than my Japanese. They’re looking really good as a force. 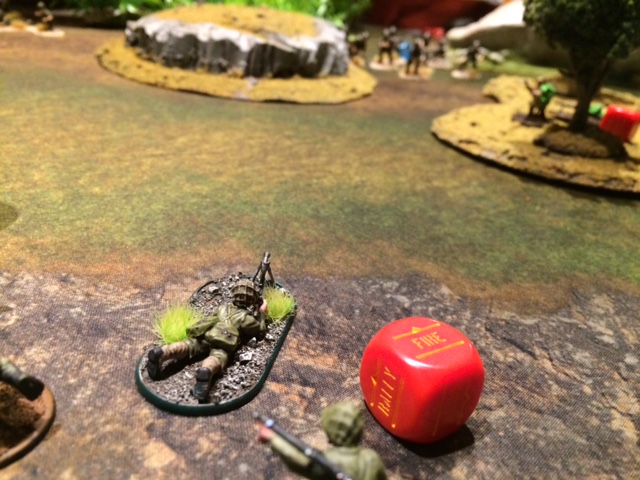 The game itself was pretty rough. My sniper team managed to do well, and I had an amusing moment where one of my anti-tank suicide teams charged the Marines’ sniper and took them out in combat. But otherwise, until I get more numbers done for my squads I’m going to struggle with the Japanese.

With the expansion of space at Drawbridge Games (three times the number of tables), I was pleased to finally be able to run a sizeable Steamroller event at that venue. In chatting with the owner, we were laughing about how the Swamp Gobber Chef is by far his best-selling model. That got us thinking: well, how about a Chef-themed event?

Thus, the Gobber Chef Classic was born. We decided to have a steamroller that included all the different bells and whistles of official trophies, plus a bonus trophy awarded for painting and conversion work: the best food-themed model.

I’m really pretty proud of how the trophy for the conversion model turned out!

In addition, Enrico managed to get Whole Foods to sponsor the event as well and provide prize support in the form of a number of gift cards.With new table space and ample prize support, the Gobber Chef classic just needed players. And players we got, with 14 showing up for games.

First up, the overall winners by points: 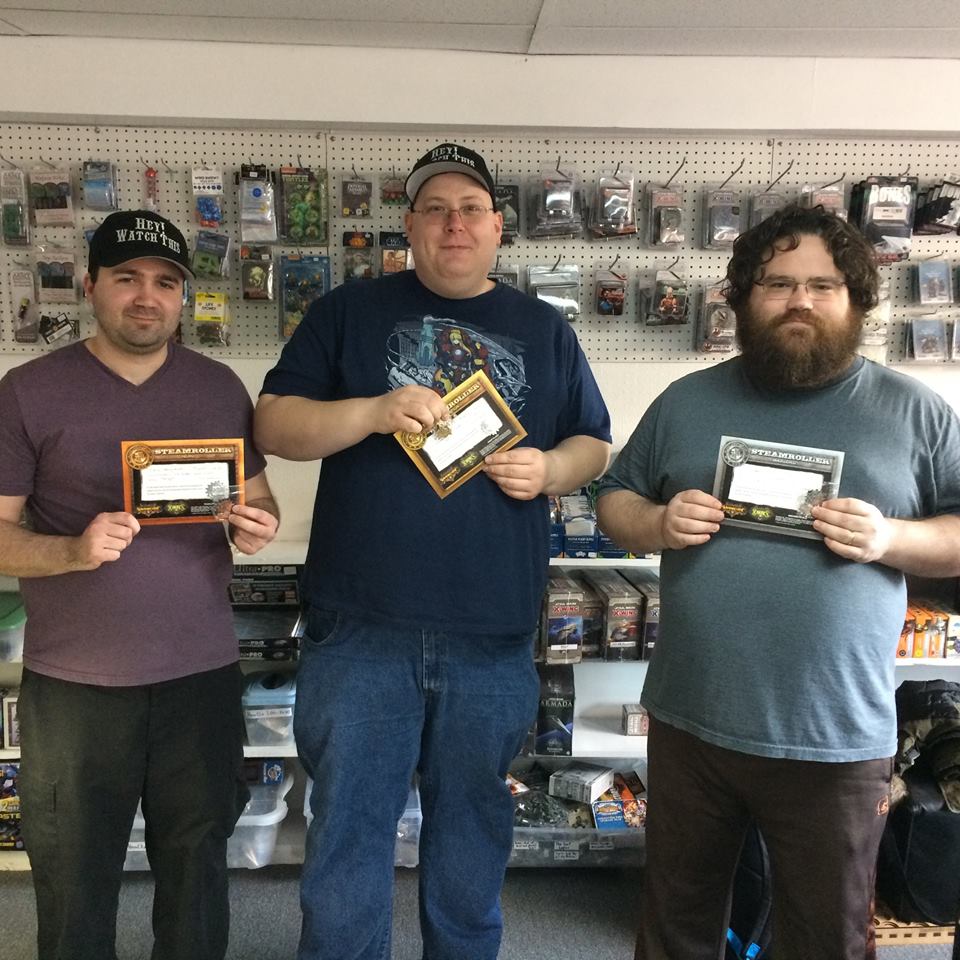 Overall Standings from the event shook out as follows:

On the best Food-themed conversion side of things:

The other entries were great as well, from Mike’s chef-slash-sawbones, Larry’s Swamp Gobber Chef, and Addison’s Gorax-dining-on-a-Tharn conversion. Eeep!

We also gave out a best-painted award for the best of two fully painted lists.

I also got a few action shots of games being played, though certainly not an exhaustive set.

Ryan N.’s Denny3 clashes against Addison’s Krueger2, and managed to pull out the win on scenario thanks to a Poltergeist effect pushing Krueger2 off a flag when he missed a shot. Ouch! 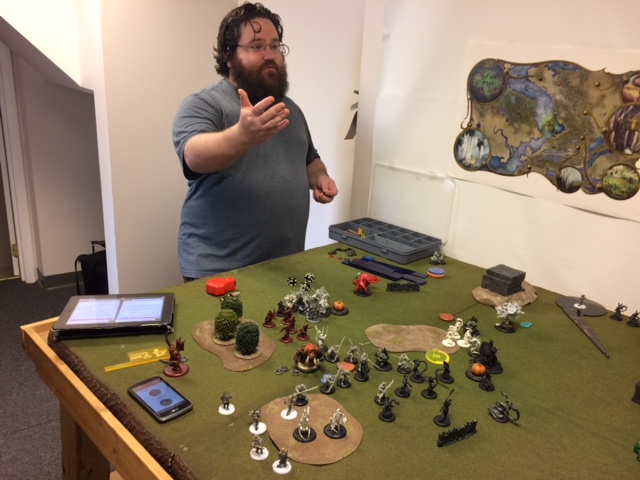 Larry in the final stages of his plan to have Molik Karn strigke from all the way downtown and take out Kyle’s Denny1 (she’s hiding right behind the pumpkin objective, and Karn is the yellow proxy base).

Andy’s Kraye got a little too close to Ryan M.’s Ossrum list and was shot down by all the little dwarf jacks. 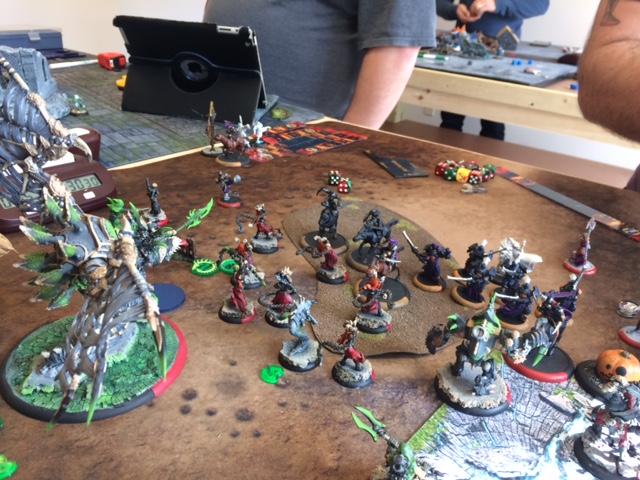 Denny3 again for Ryan N., who was worn down by the sheer volume of Savage’s Vindictus list.

Mike’s Cygnar try to hold the line versus Brad’s wall of Naaresh, but the big elephants triumphed again. 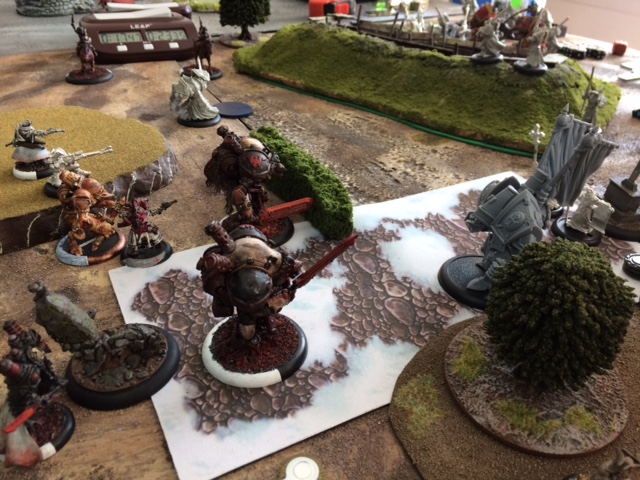 Andy’s Cygnar, this time led by Stryker2, faced off again Stu’s Durst list. In a complete grind that ended with literally only the two casters left trying to kill each other, Stu managed to win thanks to a Durst retributive strike on Stryker2. 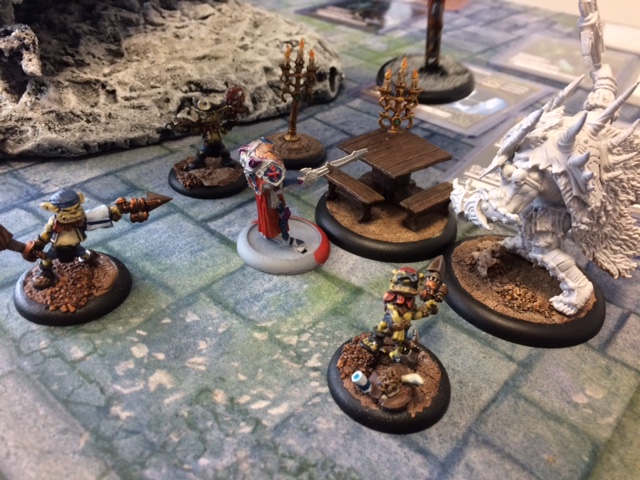 This last one came after a battle: Kevin’s Kromac2 sits down for a pleasant goblin-served dinner with Savage’s Vindictus following their epic clash.

Finally, a shot of the winners of the Whole Foods Door Prizes: various gift cards loaded with cash kindly provided by the grocery company to support our local endeavor!