I’m a rather infrequent Warhammer 40k player, but I have a Tau army that I’ve been monkeying with painting amidst all the Warmachine/Hordes and Bolt Action in my painting queue. With the release of the new , I mean Shadow War: Armageddon rules, I wanted to get a team finished up and ready for some games.

Given that this rule set really is just a return to Necromunda, I wanted to give my Tau the right feel for wars in the Hive stacks. Thus, I had to ensure that they had the proper mohawks to fit in with the local gangs.

I figured that the Water Caste must have studied up on Hive Gang operations before committing the team, and recognized that many Hive Gangs in Necromunda (their study site) used raised tufts of hair down the centers of their heads to identify themselves. Given that the Tau would certainly want to be culturally respectful, they had to don such garb themselves. 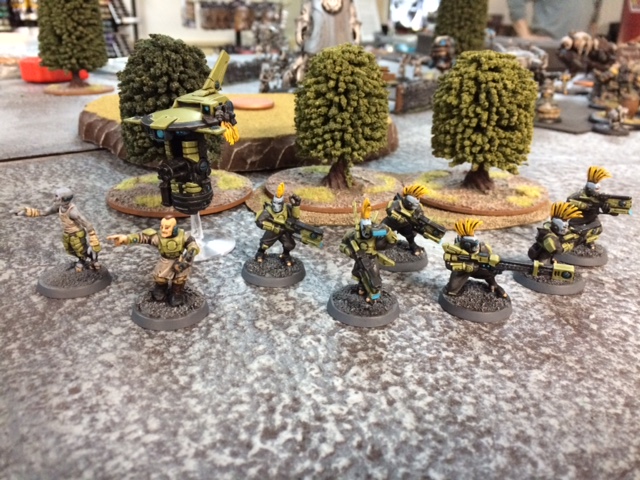 Here’s the full force for the game. It’s the Pathfinders with mohawks, plus the Recon Drone, a Juvie Tau armed with only a combat knife (my Tau dock worker), and the Tau local operations translator human that I’ve used before.