The March of the Kriels is an open event that will run at Drawbridge Games during Summer 2017 until it is completed (estimated 12 weeks). The campaign fits with the current Privateer Press fluff, focusing on a mass exodus of the more major Trollbloods Kriels moving southward to Tolok Fortress in the Jungles of Alchiere. The campaign is designed for people to play different points levels but still participate, whether one game or many.

The campaign map will be a 12-foot long banner that gets hung at Drawbridge, which will feature each of the 12 steps along the way. As Trollbloods win games, they will move one space. If they lose on scenario, they stay put, and a loss by assassination moves them back a space. Think the Mountain Climber game from the Price is Right for the feel of how this will go. Each Thursday at 10pm the results will be tallied, and the markers moved.

The first part of the Journey features some treacherous mountains and hills punctuated by enemy strongholds.

The second part of the Journey starts pleasant enough, but soon sees the Trollbloods winding their way through the Bloodstone Desert.

The third part of the Journey sees the Trollbloods cross into Alchiere, and finally reach Tolok Fortress.

This is a great opportunity to start up a Trollbloods army if you haven’t, or play against one of our Trollbloods players. A few forces can also ally with a Troll Kriel if they choose: Khador and Mercenaries can choose to have their games contribute to the Trollbloods’ cause. However, given that these are allies not the Kriels themselves, it takes two declared “ally wins” to move a given Warlock’s Kriel one step forward on the map. And all the other forces, plus these if they’re feeling belligerent, get to strive to slow the Trolls by defeating their forces along the way of the journey.

While most of the Trollbloods Kriels are making the journey in the fluff, a couple of Warlocks are notably absent from the progress (Borka and Horgle). Thus, we’ll be tracking the advances of only those Warlocks who are on the path. 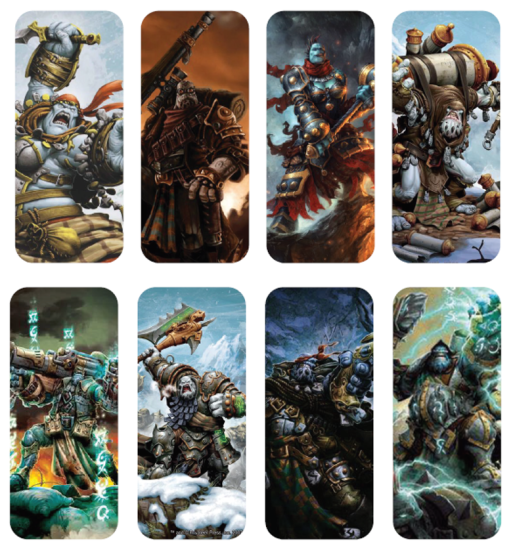 Participating Kriels: Calandra, Grim, Grissel, Doomshaper, Gunnbjorn, Madrak, Jarl, and Ragnor. (Note: it was unclear if Ragnor or Jarl were actually on the path in the fluff, but to allow more options, particularly to new Trollbloods players, we figured we’d let players field them)

We’re hoping that the fun of telling the story will be a big part of why people participate in this mad race for the end. Trollbloods players (or people starting Trollbloods) can jockey for their preferred Warlock’s success. Meanwhile, everyone can play spoiler and obstacle. The campaign will kick off on June 8th with a quick IKRPG scenario that sets up the events, followed by the inaugural games.

However, we also know that campaign rewards are a great way to get games moving–so check the section below for the great prizes that Drawbridge is making available to players.

There will be an entry fee for the Campaign of $10 to cover the production costs for the map and combine with the prize support generously offered by Drawbridge games to enable the following rewards. As always, players do need to be Gatecrasher members.

Adversary incentives: We wanted to make sure that there were ample opponents for the Trollbloods players to face. Thus, participating players can rack up “Adversary” points. They accumulate with a point per game played against a Trollbloods player (25 points or more), or 1/2 a point for a Battle Box game (0 points). At 10 points, the player wins a new Warcaster or Warlock. Upon entering the league, the player will list what Warcasters or Warlocks they have for their adversary force–when they hit 10 points, they’ll receive a free surprise Warcaster or Warlock that they don’t yet have for that force. At 16 points, the player will receive an additional surprise Privateer Press official item that matches their preferred Adversary force. We’re estimating the campaign pace as more than 10 weeks, so even players who only get in a single game per week can still make the initial mark. Finally, adversary struggles and success will be featured in the campaign reporting as the story of the journey gets told.

Trollbloods players incentives: Just like adversary points, players can rack up “Kriel” points. They accumulate at the same rate, and yield the same rewards. Thus, a really ambitious player can get themselves a Troll Warlock and one other Warcaster/Warlock for the adversary force that they fielded! Trollbloods players also will receive the free surprise official Privateer Press item we’re arranging to mark their participation in the event. And finally, the progress of the Trollbloods players will be tracked and reported, with a feature on each Trollbloods player and their progress.