So I recently won a Steamroller with my Trollbloods, and now just a couple of weeks later I managed to finish in Third Place in a 16-player Masters Trinity event.

For the event I worked hard to get everything painted up and completed. That meant finishing up a unit of Pyg Burrowers, as I think they could be good with Grissel2 (spoiler alert: they’re not). I also got a Swamp Gobber chef mostly painted, but he still needs touch-ups and so I’ll include him in a subsequent update. Despite him being a little rough, tho, I was completely painted with all three lists. I’ll attribute any success I had to the fact that I managed to field so many painted models.

They’re so cool looking, and they could be absurdly nasty for assassinations with her. But their Burrow is just ghastly slow. Both games I used them they never even had an opportunity to surface–and both were long games.

For the Masters, it was a Trinity event so that meant three lists. And it was Divide and Conquer 1, which meant that I had to play each at least once (a harrowing proposition). I decided to go with my Doomshaper2 list that has been working very well, my Madrak2 anti-Ghost Fleet list (as I was anticipating up to three Ghost Fleets at the event… was wrong), and my Grissel2 list that I’m tinkering with.

The three lists and my results, along with my third place Bronze medal.

Round one was against Dave C’s Legion of Everblight led by the Twins. This was a brutal slug-fest of a game. A Champion on Feat turn missed both MAT 9 attacks on an infantry model, which meant I didn’t finish off one of his heavies with 2nd/berserk swings, which led to me having to play really defensively. Mercifully, the timed rounds imposed a deadline. Dave played the game in great fashion, and literally left me with just Madrak2 and a single knocked down Fennblade Officer far away–but he ended that turn with only 18 or so seconds on his clock. We agreed to work out his declarations of his turn on my clock, so he could get the most from his time. He charged the unprotected Madrak2 with a boosted attack roll by Rhyas. Hit and scored 13 damage, but not enough to kill him–and no Crit meant that Madrak2 survived as time ran out. One of the closest games I’ve ever played, against a great opponent. I’ll remember this game for a long while. I bet 3/4 of the times he would win the match, but I happened to get lucky. 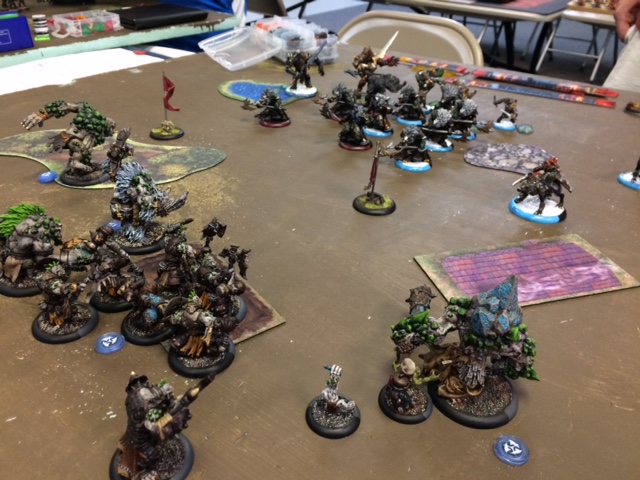 My second game was against Savage’s Circle Orboros force. I wanted to get my lists played to not be locked in a later round, which meant either Grissel2 or Doomy2. Given that he had Grayle, which would give Grissel2’s shooting list a really poor look, I had to choose Doomy2. I ended up facing Grayle, and taking him out with Rök’s usual pacman trickery. Grayle didn’t have Fury on him, so once Rök got there with Wild Aggression and Primal on him, it was over.

Third round I played Larry IV and his Baldur2 Circle Orboros list. I forgot to take a photo of this game, so apologies for the substitute image above. The list was a Woldwrath, Megalith, another stone heavy, two of the stone shrimp, some stones, and a few support models. I knew that Grissel2 was a bad look into it, but I also knew that terrain could be my advantage–there was a big house blocking the path from the center zone to the flag on a Recon. I took a chance and played Grissel2, and it paid off. With the house and my strong shooting, I was able to misdirect and pull him to one side, then run her to to the flag on the other side and clear a few models. I had just enough stuff to clog the way each turn, which led to a scenario win for me. It wasn’t pretty, and I didn’t do more than 1-2 damage to Megalith or the Woldwrath thru the game. But it worked and got me to the final game undefeated.

Game Four was against Larry III and his Caine3 Cygnar list. I wasn’t list-locked, so I knew I could play any of them. I might have been better to have chosen Madrak2, as he had even more shielded protection, but I went with Grissel2 as there wasn’t much to screen Caine3–and if I could get him knocked down at any moment it would be game over. It ended up being a pretty fun slugfest. He got the advantage on his Feat turn, but I still had ample to threaten him. I was able to take out all of his lights except for Ace, and cripple the right side of the Hurricane. Still not quite enough to push me thru, and there were two turns of some really bad looks for me. I played well enough for him to keep Caine3 away at least, so I’ll take that as a developing player. “First step: don’t lose to assassination on the Feat turn”. Done. Caster eventually dying in an attrition match, well… so be it. I’d prefer the win, but I’ll take this against one of the top players in our meta to be sure. Was a great game, as always with Larry III. He’s an exceptional player, and every game I face him I get better.

All in all a great tournament. The folks at SCG Hobbies put on a good show, and there was great turnout. I was really proud of myself for doing so well, but I also recognize that I got very lucky in my games. A few seconds more in game one, a gap of more than an inch in game two, and just enough models to clog in game three were the difference between 3-1 and 0-4 for the day.