A bit behind on updates due to the Independence Day holiday, but that didn’t stop me from getting ample games in! Here’s the rundown of my games played with my Trollbloods… a whole heap of Gunnbjorn and Grissel2, with a few doses of Doomshaper2 and Madrak2 sprinkled in.

Painting these past two weeks put me at 374 total points so far for 2017–already exceeding my 365 point goal. Pretty good progress, given that we’re only in July. Trying to decide if 500 points for the year is the new goal, or the impressive double-rate of 728 points. Given that I’m both doing this Trollbloods campaign at Drawbridge and prepping my Convergence army to be two fully-painted and ready lists, I’ve got high hopes for the latter!

Anyhow, onward to painting! And the Sea King!

I love this model. His rules, well… less so. Still not sure what Warlock (if any) can make him functional. But I’m really pleased with how he turned out in the painting. 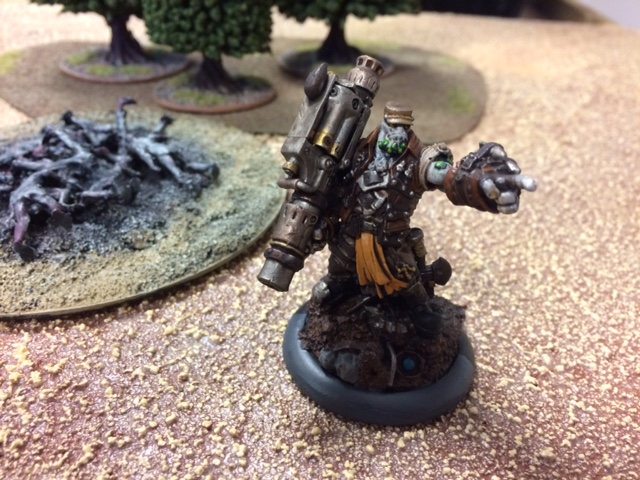 Gunnbjorn is my current choice for helping the Sea King get work done. Snipe and a turn of ranged immunity helps a lot, as well as the wall to limit people reaching the big guy. 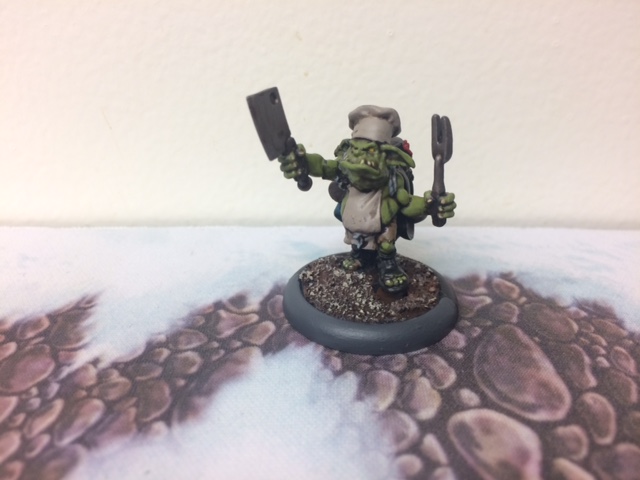 I also completed a Swamp Gobber Chef, because I needed that clutch one-point option for forces. I’m not fielding enough infantry to ever make him all that useful. Guess he can simply cook up the whelps for eating by giving them double Comfort Food.

Got in a whole heap of games with my Trolls too, so ample photos to follow.

Finally a game where my Burrowers contribute to a win! The first (and only time, as you’ll see below). Knocked down Paul’s Karchev and then the Burrowers finished him off. 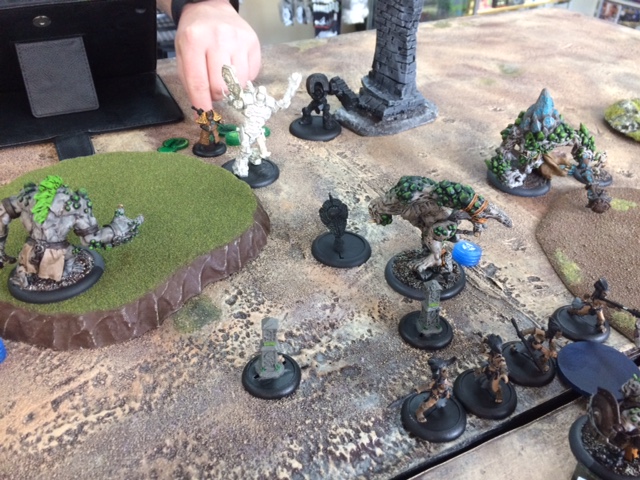 I next faced Joe, a new player to our area, fielding Baldur1. It was a slug-fest, but Doomshaper2’s speed let me get in better position for scenario and I won via that method. Fun game and glad to see new folks!

Did I mention how much I hate Haley1 ever? I’m certain I did. I faced Brandon’s Haley1 in the first-ever outing of the Sea King. Got assassinated by her, despite having pretty good leverage. I’ll put this down to Grim2 being just a little too aggressive. 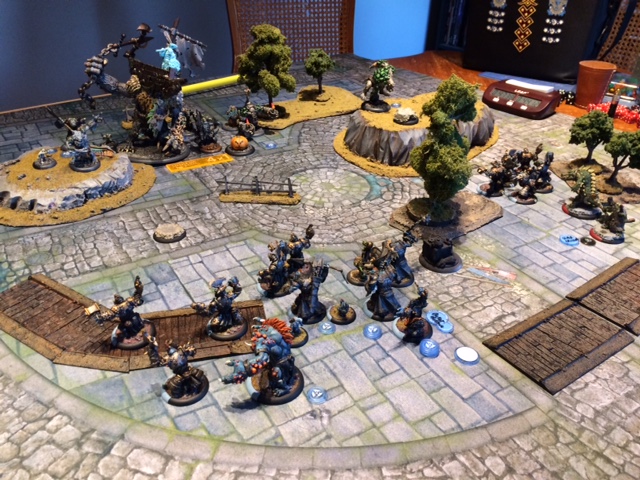 Gunnbjorn’s first outing with the Sea King also ended in a loss. The Sea King lived, everything else died in my game against Ryan’s trollbloods led by Calandra.

More Troll-on-Troll violence when I played Mike G.’s Trollbloods. They are amazingly painted, so I had to include this great shot of his cavalry charging up toward my line. 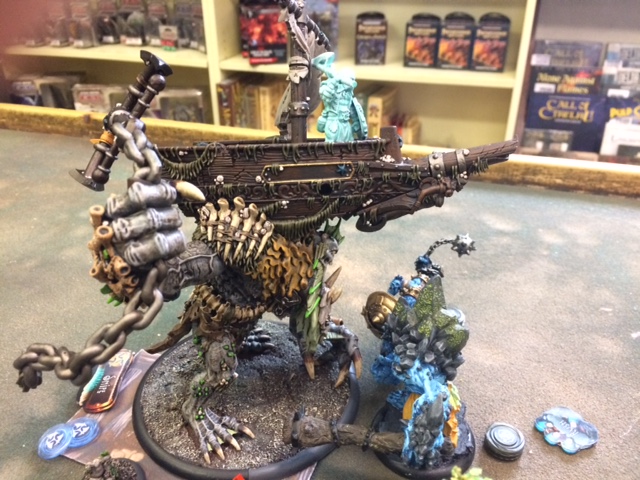 He fielded Horgle2, who is no joke with Mulg. My Sea King was undamaged, then got a bit too close to Mulg and a Bouncer. Horgle2’s feat plus them ended him with Fury to spare. It bought time for Gunnbjorn to win the game on scenario for me, but Horgle2 remains legit for damage output to be sure.

Seeing Mulg in action makes me always want to field my own. My next game against Paul’s Khador, led by Kozlov, saw Mulg in full destruction mode with Doomshaper2. A bit of clobbering got me up there. Kozlov tried to retaliate, and Mulg finished him the next round. 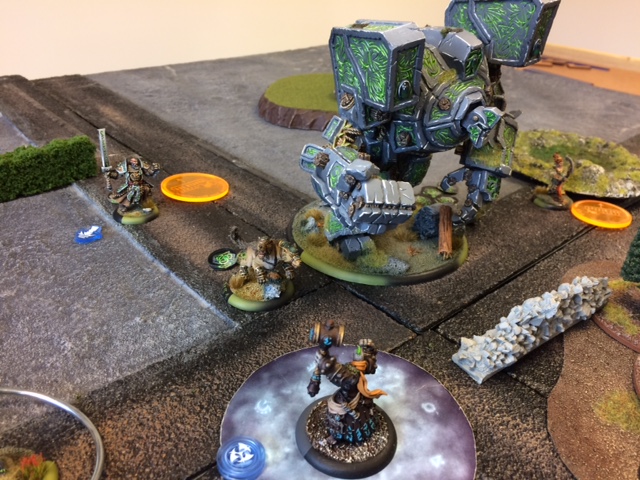 Next game was against Michael D’s gorgeous Circle Orboros force. I took Grissel2 against his Baldur2. It seems like I always end up with her into this matchup, even though she’s hardly ideal. And yet again, I managed to pull a win by assassination. Go go Grissel2!

Another game against Paul’s Khador (yay for summer and getting to play more often). This one was against Kozlov again, with me fielding Madrak2. Came up short even though my Champions did a number of one half of the table. Once the infantry is stripped of Madrak2 he gets way more fragile.

Next up was a great game against Taylor’s Exulon Thexus-led Mercenaries. This one was a win by sheer dumb luck and then some kindness from my opponent. I left a dumb opening that was a pretty likely assassination. Thexus came up just shy of killing Gunnbjorn. I was able to recover and get him safer, and then took my own shot at assassination. Taylor is an experienced Trollbloods player, and gave me an order of activation suggestion that really helped me get it done (rather than coming up short). Really fun game with lots of twists and turns, and a great opponent.

Next game was against Dave B’s Legion, again his Absylonia2 list. Given that he wasn’t going to be fooled again by Doomshaper2, I took Gunnbjorn. It was probably not the best choice, but I had a couple fair moments of success before Abby2 was able to just get close enough to get a Scythean in on him and assassinate me. 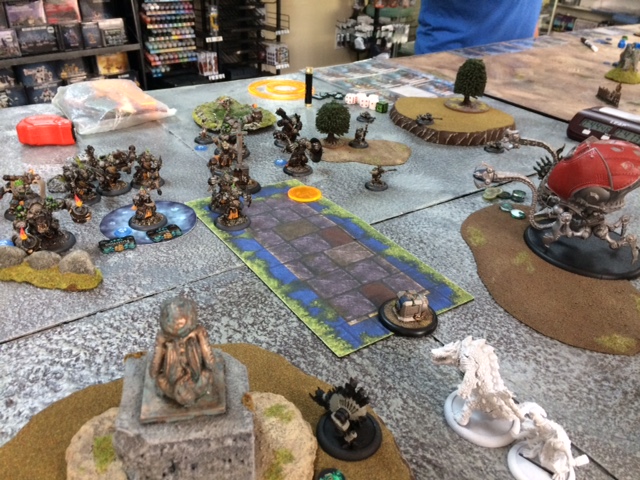 These were actually two games, both against Kyle’s Cryx using Skarre2. It was two games, because in our first Skarre2 stood too close to the objective during her Feat turn. All the defense in the world won’t save you from an AOE knockdown on a DEF model adjacent to you. She didn’t take damage from the blast, but it made subsequent shots into her an easy assassination. We re-racked and played the same lists again. This was a much closer battle, and I managed to win by scenario–Janissa’s heroics pushing models away from contesting are always welcome. Two great games!