Welcome to the Drawbridge Games ruleset for a Warmachine and Hordes Permanent Death League. This site will cover the rules, rewards, and track league results from the Spring 2018 league.

The rules are pretty simple. Players gather and play games together as a part of the league. Anytime a character model dies (warlock, warcaster, or FA: C model) that named model cannot be played again in the league. We decided that it’s limited by version: so losing Caine2 means that you can still set Caine1 on the table. It’s a fun style of play, that trains players to be a bit more cautious with their characters (a benefit for developing players) and forces you to sometimes play things outside of your comfort zone in terms of new models hitting the table or seeing how you do without some key support piece (a benefit for all players). Most of all, it’s a fun way to kill the favorite models of your friends! 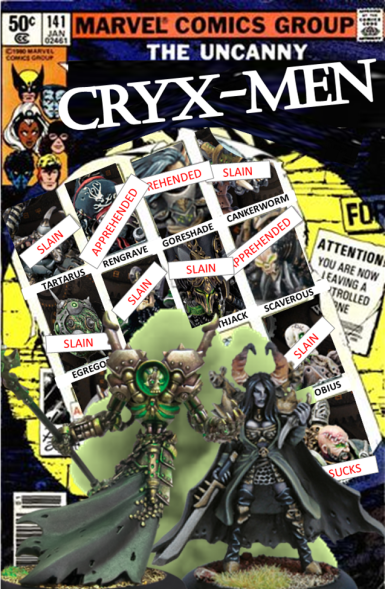 Players in the campaign need to only commit to which faction they are playing throughout the campaign. A tally will be made of all participating factions, and a “Wanted” poster constructed for each participating faction. The “Wanted” posters will be used to track which characters have died–with a large red DEAD stamp across them when they perish. They’ll be posted on this site (below), but also on-site at Drawbridge games. An initial example of the Legion of Everblight wanted roster is below:

Some special cases exist for a Permanent Death League, and need not clutter things here–instead it will be listed on the faction posters. A few general rules:

For named character units (e.g. The Withershadow Combine), losing one model from the group means that all are lost at the end of the game (the survivors mourn the lost). For character units that have just a single named character (e.g. Blackbane’s Ghost Raiders) losing grunts from the unit does not matter, only when the named character themselves dies is the unit out. For Warlock and Warcaster units, the same logic applies: which means that Butcher3 can lose his dogs often and still be played, but Grim2 better be careful with Muggs and Krump. In the case of any named characters that can be brought back to life, it’s the end of the game that matters (e.g. Saeryn & Ryhas, Talons of Everblight).

Drawbridge will use a ticket reward system. When each of the conditions below is met, the player gains a ticket. All the tickets are put into a central container. After the last game of the final night of the league, the league rewards will be drawn at random from the pool of tickets accumulated. This means that everyone who participated in the league has a chance to win, but the more you participated the better your chances.

The following earn a player a ticket: 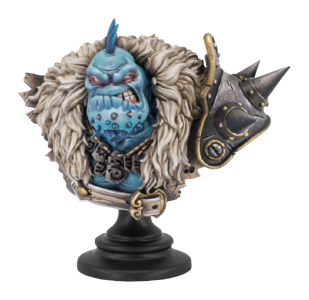 Your characters better be as tough as Borka to survive earning that last one!

* The intention of this is that players will be painting new models for the event, to get us further along in play-it-painted progress as a community, as well as to ensure that we paint up the models that replace our lost characters!

Week 1 saw its fair share of early deaths, particular amid the Khadorians. Things grew a bit during Week 2, as Khador didn’t suffer as badly as they had during the first week–instead it was Cygnar and Retribution that got a bit tighter as games went on. Week 3saw not the same rise in death, but still a few. It seems to be a very dangerous world for merc and minion solos with floppy hats and rifles, as Kell Bailoch joined Longchops in the corpse pile. Week 4 added a few more army leaders to the death list: Garryth the Blade of Retribution, Master Ascetic Naaresh, and Lord Commander Stryker all being assassinated. Despite those losses, people are definitely starting to play cagier with their named characters, particularly Kozlov who has hit the field numerous times across multiple players and survived. Week 5 was another bloody one, losing models across four different factions–and finally another character warbeast perished (Tiberion joining Azrael on the scrap heap).