So this post is mostly about my new additions to my army and practice games, trying to “unlock the puzzle” of what list to pair with my Kallus1 Primal Terrors list. I really enjoy Kallus1 with the Blightbringer and Ogrun, and I think that it can play into lots of forces and do okay. I’ve been now puzzling over what to use as a second list–what does it struggle against? My problem: I think it has limits with lots of troops, and with serious armor. So this is me working out a list that can reasonably deal with both of those things. So, as always, more painting to help build things that can help vs. troops and high armor. 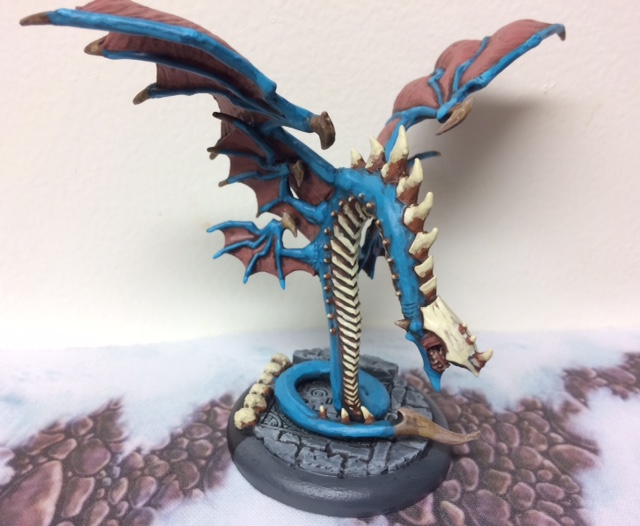 First up, I finished painting my Angelius, which I think displays my scheme really well. It’s not quite as mottled in the bone as some of my others, but I think it’s equally striking as it makes it appear a bit smoother and more serpentine. Pretty much my favorite armor-cracking piece in the game lately.

I also completed Ammok the Truthbearer–a new Blighted Ogrun model for Legion of Everblight. I definitely wanted to get him done because I see him as really useful in Primal Terrors lists. Between Rise for the other Blighted Ogrun and his ability to stop Incorporeal, he’s a lot of utility. It’s also the first Ogrun I’ve done, so a good chance to start to work out what they’ll look like when painted.

As for games, I’ve been practicing for a big upcoming tournament in Rochester, NY. It’s a Warmachine Weekend Qualifier event that takes place over two days. I’m not holding hope for winning, as it’s supposed to be a full six rounds event (that means 64 players competing for the title). What I do want is to get more reps in with my Legion forces, to get as much experience with them as I can in higher-level play. So it’s a great event for that purpose. This week that means some last-minute games to prepare and practice lists for the tournament.

This was my first attempt at running a more beast-heavy list with Fyanna2. My game against Larry IV’s minions had it facing Maelok and all of the gators. I did pretty well in the game to draw it into a position where I was scoring two on the right but threatening his caster enough to keep him from moving my way. I was immediately impressed by how annoying Iron Flesh can be on the Hellmouth–that swing of ARM (plus hiding it from sight) kept it alive against marauding gatormen the entire game.

My second game, against Larry Paladin’s Heretic Grymkin list, I forgot to take photos. Because Ammok did exactly as I hoped he would in the game, here’s the Hellraiser puzzle box as a stand-in photo. Wow, does he work wonders against incorporeal models. That static 10″ of removing the ability is really powerful. Plus he was one of the models that helped me score early points in the game, sitting on a flag. That said, I lost on scenario overall. I lost one beast too quickly as I had moved it to cover where Golab was going to end up, but then remembered that I needed Golab to hang back and score. Meant for a less favorable exchange. Still hung in the game a while, but it ended with a spot where he simply outstripped my ability to score points (scoring 2 to my every 1) on attrition alone. Was a good game. I’m still not convinced that Fyanna2 with beasts is better than the massed swordsmen, but they do hit far harder–and I need an armor-cracking option that she seems to fill well.

While I really like Fyanna2 as a warlock, I felt like this list lacked ability to threaten effectively. I need something that can be trickier, I think, to pair with Kallus1. Fyanna2 and Kallus1 are both Feat turn tough choice forcers, which is nice, but it makes it somewhat similar. I wanted to find something that can bring unexpected threat to my opponent, from angles they may not be seeing–that still hits hard and buffs the Hellmouth (because an arm buff on that thing was pure punishment). I realized that Thagrosh2 may fit the bill, so he went into list ideas next. I managed to get in three games with a Thagrosh2 list that I really started to like–so that became my second list for the tournament. Some brief descriptions of the trio of games comes below (clockwise from left).

First I clashed against Ryan’s Caine2 list. While he took out the Ogrun effectively, the rest of the army managed to work pretty effectively. The combination of Carnivean and Golab is fantastic–whatever comes to get the Carnivean gets injured by spiny growth, which means that Golab gets finisher. Worked well to clear out his stuff, and Caine never got to safe place to really leverage his Feat for assassination. Next up was against Paul’s Karchev-led Khador force. The Hellmouth proved effective in forcing poor-outcome trade-offs, and once I started to get the advantage in scenario it became hard for his force to stop me. Finally, Thags2 faced Steve’s Retribution army and Helynna. I just stood back during the Feat turn, and managed to get some unexpected points that way that I leveraged to a scenario win. In each game Thagrosh2 definitely got involved in some valuable ways. P+S 18 on a warlock with Manifest Destiny is no joke.

So I’m superstitiously nervous about the tourney, as I tend to adhere to the “bad practice, good tournament” line of thinking. I’ll need to keep on my toes during all the games if nothing else, as I’m not as familiar with the Thagrosh2 list in particular as I would like to be. Anyhow, here goes nothing!

One thought on “Unlocking the Puzzle”