Various companies are watching the Fall 2018 Drawbridge Blood Bowl League with excitement, and calls are coming in to the Commissioner’s Office with offers. This Fall, leading teams and top players will get a chance to secure these great endorsements to enrich their team. Check back frequently as more will be added as we go.

Hike: Believe in Something 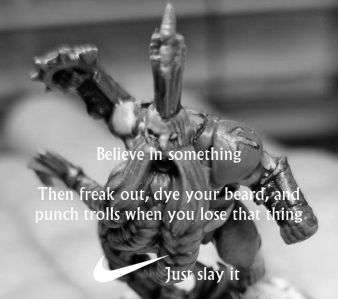 Hike (pronounced Hik-ey) a noted Athletic Boot manufactuer, just released the details of their new ad campaign. The company was concerned that their image was one of sweatshops and underpaid (and undersized) halfling laborers, so they wanted to show that they are more socially conscious. That meant an extensive campaign picking sports stars from a variety of sports and using a black-and-white “believe in something” tagline to support their brand’s image.

The Hike endorsement carries a one-time ad campaign signing bonus of 30,000gp. The Team Manager can immediately add that to their treasury. In addition, every time the player uses a patented Hike Boot (or footwrap, in the case of the partially-barefoot dwarf team) to stomp an opponent for a big highlight play, there’s an additional payout. That means that every time this player causes a casualty result of a 51 or higher on the casualty table when using the Foul action (not a regular football play, mind you–only on boot-stompingly-glorious fouls), the team immediately gains an additional 10,000gp.

Season Sponsored Player: Finn the Fierce (#10) for the Fort Tyr Miners. Finn came to the recognition with Hike for rushing right up to a goblin fanatic and having the courage to pulp him before the ball and chain got swinging. That’s why Hike has their eyes on Finn’s progress!

Not to be confused with StoneFire Wagon Wheels, StoneBridge Wagon Wheels has been supplying the Drawbridge Football League with quality meat wagon wheels since the inception of the League. While carting dead players off the pitch may seem less glamorous, most fans of the sport arrive at the games in wagons with their own StoneBridge wheels, which helps cement the brand as one of Nuffle worshippers’ favorites.

StoneBridge tires gives their endorsement to the team who has suffered the most Dead! results on the casualty table for their team. The League starts with this endorsement not awarded, but after one team has more deaths than any other, they will receive the StoneBridge endorsement. Due to the extra footage of their dead players being carted away, the team becomes a fan favorite. The team does not adjust their Fan Factor, but any week they start with this endorsement they treat their Fan Factor as 1 higher than it normally is for all game purposes within the match (note, however, it does not increase the total team value). However, whenever a team gets more total deaths that they’ve suffered, then StoneBridge tires swaps their endorsement to that team for their next match.

Current Team: The Green-Gray Plaguers, for the death of their star Pestigor, Goiter (RIP 9/8/18 – 9/9/18). The celebrated first-game death of Goiter, and the subsequent win by the team, got the fans well behind the Green-Gray Plaguers. Stonebridge is happy to sponsor them until such time another team suffers two total deceased players and doesn’t fold and reform.

Who knew so many blessings could fit between two buns? Nurgle King has been satisfying Nuffle fans with tasty treats in the stands for generations. From their patented “Glopper” burger to their tasty, always natural cut flies, Nurgle King knows how to satisfy. The player who gets the Nurgle King endorsement is set to earn some (un)healthy revenue… but it does mean the occasional advertisement where they actually take a bite.

The first player to reach 10 Star Player points can secure the Nurgle King endorsement if they wish. Having the Nurgle King endorsement earns the player and team some extra cash each game. The team gains +10,000gp when determining their winnings after a match. However, the player that has the endorsement must immediately mark an N in their injuries box (counts as a niggling injury as normal). If another player earns more Star Player points than the current one Nurgle King is endorsing, they can choose to steal the endorsement. They then gain the benefits and drawbacks starting in their very next game. Note that the gifts of Nurgle don’t fade easily, so players who have lost the endorsement still retain the niggling injury they acquired when they took the endorsement. Nurgle King doesn’t mind this arrangement at all: they love having a different star shown in their ads every week, taking a healthy bite into their new breakfast Croissan’Itch.

Current Player and Team: Kas, star blitzer of the Orcland Stompas, is recognized as the “Have It My Way” player of the week. He’s a multiple scorer and MVP, and the center of that brutal Orcland Stompa running game.