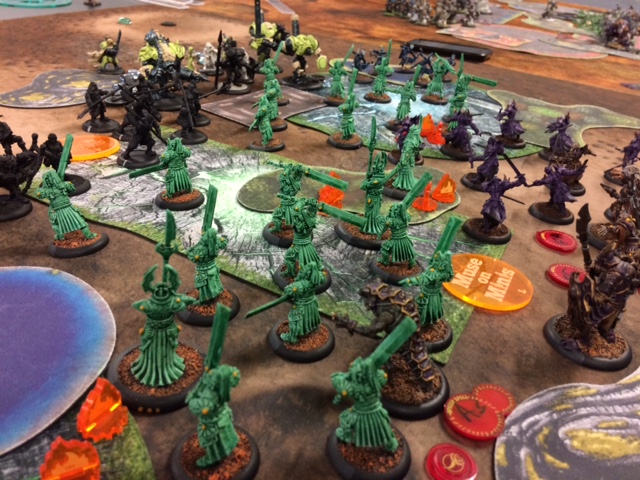 Well, part of the new-found vigor for playing Skorne in Warmachine and Hordes comes from painting something new. I got in some games, and finished up a new Warlock for the faction–one that I think has definite potential as a force leader: Zaadesh2. 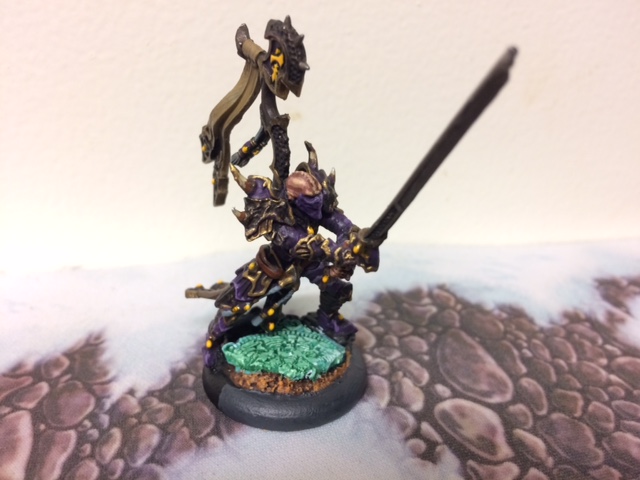 I’m using the Aztex bases from Dragonforge for these models too–realizing that the portions of inlay carving can be a great way to connect my color scheme with the Exalted models that I’ve done in the sort of jade look.

I played a couple of games with my Skorne, and lost both of them. Not surprising given that it’s been over a year since I last bandied these models about the table. I definitely believe that Warmachine is a game where you plan on losing your first 20 games with a faction. So I need to lock in for the losses, so I can start to improve.

My first loss was vs Chad’s Magnus1 list, with Zaal1 immortals. I wanted to try them out of theme, to bring Swordsmen along, which really wasn’t as great as I hoped. The swordsmen sure hit hard, but only a couple ended up making it to my opponent’s forces because of the ranged threat. I didn’t have quite enough “oomph” to take out what I needed in the heavy Warlock list, and Immortals just weren’t survivable enough with only 20 of them. (Note in the picture I’m subbing in fire tokens for soul tokens)

Then I had another loss in a very close battle against Justin’s Denny 1 Satyxis list, with Zaadesh2. This was a really bad matchup for me: battlegroup heavy Skorne versus 40 Satyxis and a powerful debuff caster. I managed to get to the point where I lost 2-1 on scenario at the end of 7, with each of us having under 30 seconds on our respective clocks. Was a hell of a grind. I like Zaadesh2’s play style of clouds, beasts that hit back when they’re attacked, and counter-charge threat. I need to keep exploring this Warlock more.

I was listing to a Muse on Minis podcast about Skorne, and one of the commentators mentioned an interesting personal challenge he did when he was playing Khador: setting a goal of playing every caster in the faction at least twice. I liked that notion myself, and as I have all the Warlocks in Skorne except for two (which I’ve now ordered), I thought I would try it myself. I’m seeing this as the best way to get some depth of experience with each of the Warlocks, to start to at least conceptualize how they play on the table. Obviously more than 2 games each would be ideal–but this is the starting aim. So I’m going to, for a bit, track my game count with the various warlocks in the faction–a true tour of the Skorne empire.