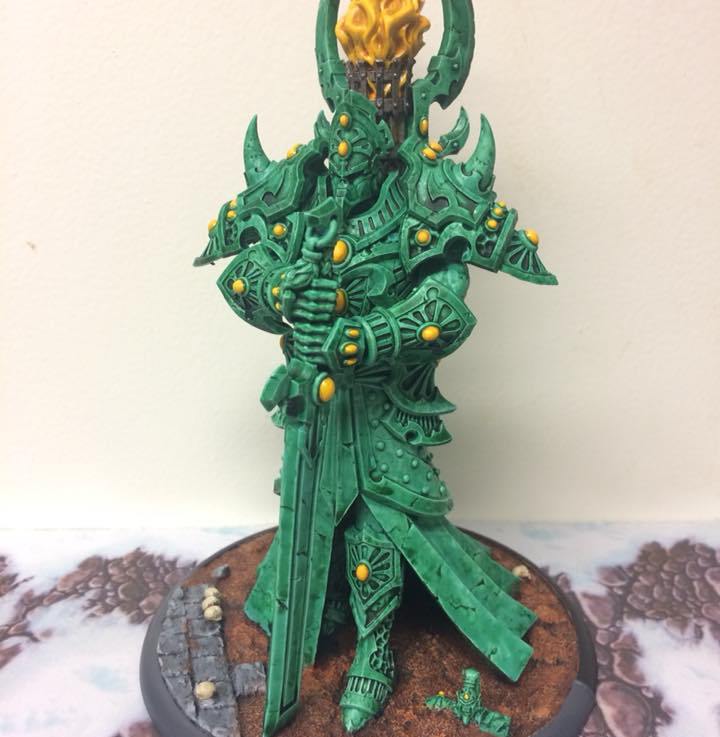 Ah, experimenting with new Warlocks. The pain of losing a lot as you get used to them, and the pain of winning ugly when you do win. It’s just like Skorne as a faction.

But first up, I finished another model: the Supreme Guardian. 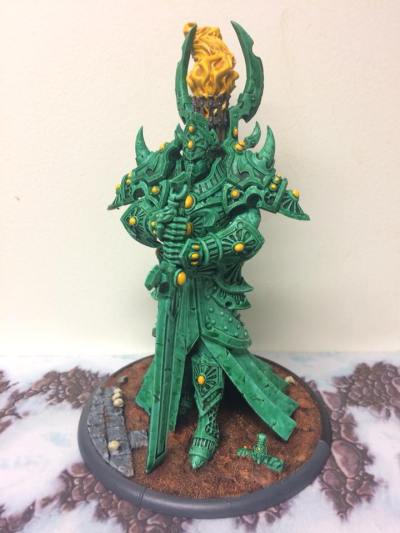 This was a great model to build, love putting him into my list. I chose to make him just a bit deeper green than the smaller ones, to represent the jade being a bit thicker. Pretty pleased how it turned out.

On the gaming side, I continued to try out a lot of different Warlocks in different ways. I’m trying to settle in on a smaller group that works, so the practice continues. 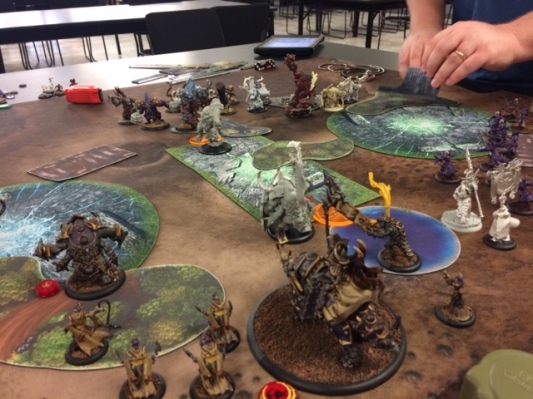 First game was against Larry’s Trolls, running Kolgrima. I took Xerxis2 in Masters of War, as I definitely want to try running him with more infantry. Won on scenario, by being able to leverage how compact she needs to stay to be safe. 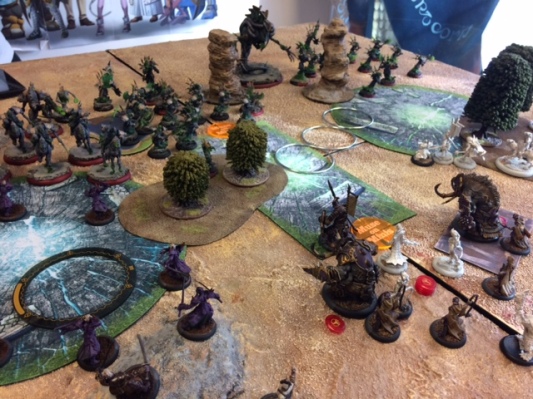 Next game was with Morghoul3, trying out a Masters of War list again. Took on Ryan’s Cryx, led by Gaspy2. Won on scenario. Love the toolbox of this warlock–he definitely has some components that make him really tricky. 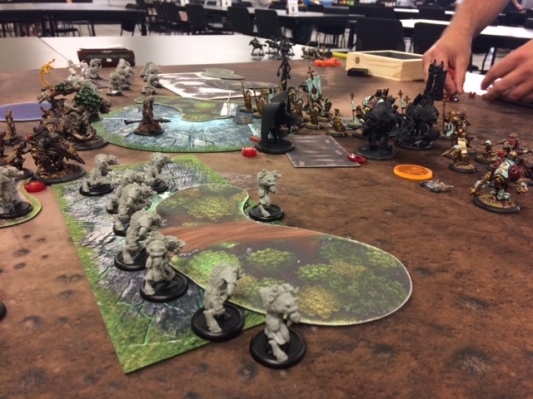 This game was with Morghoul2, in a Disciples of Agony structure: what I’m calling my “Fifty Shades of Pork” list (as those Paingiver Task Masters are carrying handcuffs for the Minions they’re enslaving). Faced off against Chad’s Protectorate of Menoth, led by Feora1. Prey helped a great deal in this matchup, allowing quick work to be made of the Flamebringers, and then helping against Warjacks. That caved in a side, which let me get strong scenario presence. Feora1 had a shot on my Warlock, but couldn’t land any of the sprays so I won the game on scenario. Was a good learning match for this list.

Played a second game with Morghoul2 as well, but neglected to get photos. It was again the Fifty Shades of Pork list, against Larry’s High Reclaimers with double Judicator list. I managed to get a strong scenario position via attrition, which really helped. The list does have to think carefully about where it applies force, but it’s been fun to play so far. 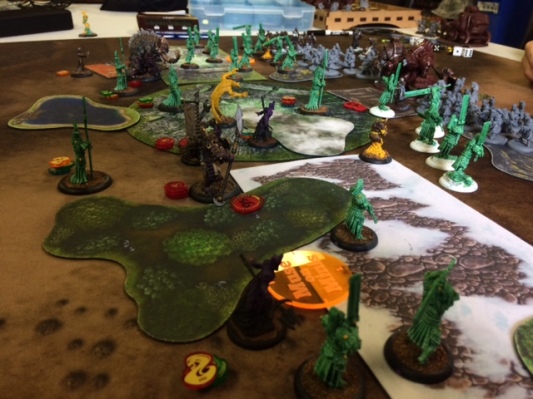 Next up was a match versus Larry IV and his Khador. It was Vlad1 with ample rockets, versus my Zaal1 Exalted list. While that’s hardly the list I want to face with the Immortals, I got a pretty healthy scenario lead which helped me then get enough clear that the Kovaas could move in with Last Stand and assassinate Vlad1.

Followed that with another two (sorta) games with Zaal1 against Larry’s Cygnar. He had a shot at assassination early, so we decided to play it out w/ proxies then re-rack and try the game again regardless of the success or failure to see how the lists do against each other in more depth (as if he hadn’t gone for the assassination). He managed to shoot Zaal1 to death with that one. In the re-rack I fared much better in terms of surviving the onslaught, and got to the point where it was a done deal to assassinate Haley2 after attrition advantage. Was a good split (counting it as a win and a loss, as it was mostly like two games), and an approach I really was glad we did. Gives more reps with these casters, and more exposure to how games can play out. Helps each of us improve as players. 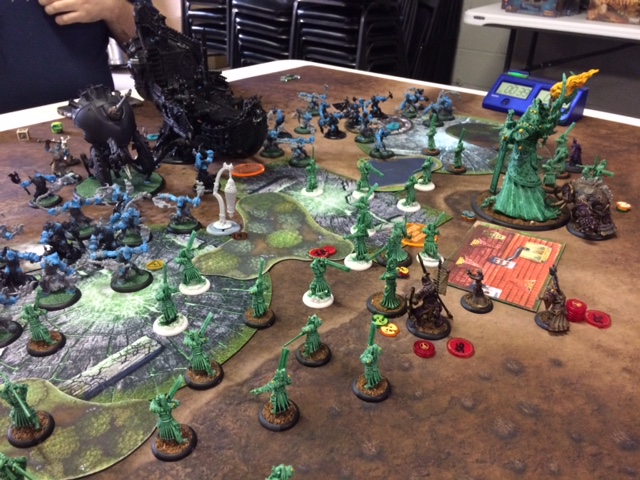 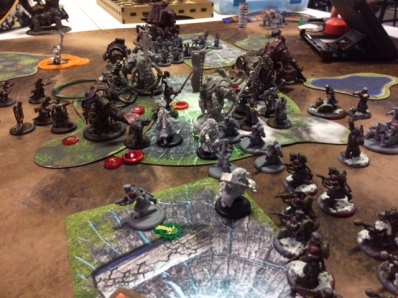 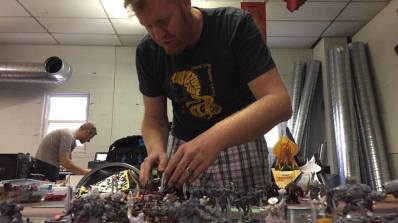 Finally had a set of games at a game day at our new local store. Played against Rob’s Skarre3 trolls-in-cryx list, and won not thanks to anything I really did so much as on clock advantage (brought Zaal1). Then faced Larry IV’s Khador a second time–again with Vlad1 rockets. I took Zaadesh2 in a really bricky list, and managed to push the raw force of the warbeasts right up to where Zaadesh could get a shot at killing Vlad himself (which he did). Third game was against Larry’s Syvestro list–my first time playing against Crucible Guard. Went about as well as you’d expect: took the wrong list into them (a Zaadesh2 brick that couldn’t handle infantry well) and wasn’t ready for some of their rules interactions. Still a fun game, and amusing to play both a father and a son on the same game day in sequence (You’ll see that my only picture of the Crucible Guard game is the one Larry took, which is sadly more me than the models).

All-in-all a heap of games in a short amount of time. I’ve really enjoyed getting back into Skorne as a force, and it will be where I’m at for at least a while in my games.