Tag: The Mayor of Future Cleveland 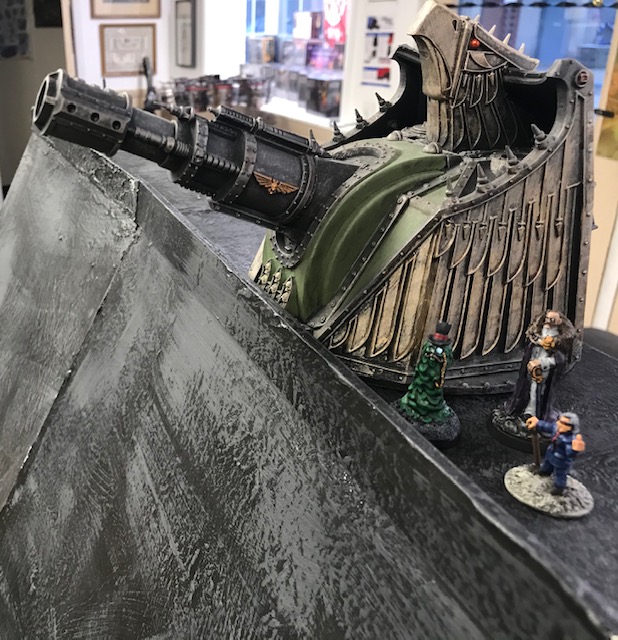 The following is a narrative battle report for our mega-battle culmination to the Second War for Futuris Clevelandis. Huge thanks to Ryan for building walls and terrain, and to Rico, Mike, Andy, Colton, and Jeff for painting up great models to join in the battle.

The time had come. The enemies were at the gates. The Mayor of Futuris Clevelandis stood on the battlements, his electro-monocle showing him the massing forces below, while his trusted aids counseled him on courses of action. While the advisors were solidly Imperial citizens, the Mayor’s slight mutation meant that he was just as uncomfortable with Imperial rule as what the forces of ruinous Chaos would do to his precious city.

While defenders prepared their positions, inside the city walls critical infrastructure was being prepared and defended. Even the unemployed buskers of the Mechanicum were given temporary work furloughs to sing songs of praise to the careful machineries. 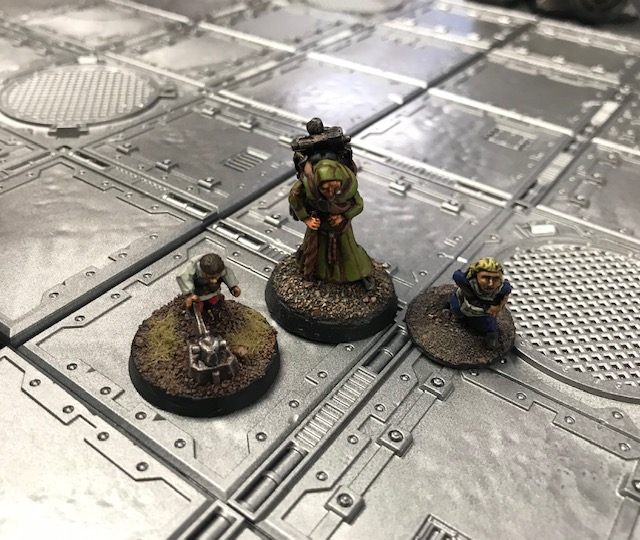 The citizens, like this crone and her two grandchildren, had seen the horrors of war before. They expected difficulty, but had no idea the cruelties that Chaos planned for the invasion.

Adeptus Astartes from the Salamanders and Ultramarines chapters manned the massive walls of Futuris Clevelandis, determined to keep them intact and the city center protected. Every unit they could keep from getting to the city was a critical objective spared and civilians defended. 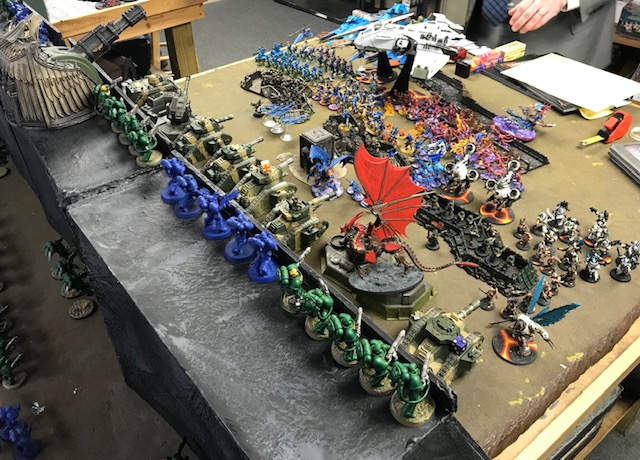 When the conglomerated forces of Chaos arrived they did so with a grand howl, spilling from warp rifts and bulk landers alike. Strangely, the Eldar that had been plaguing the system with raids showed up and launched an assault at the walls of Futuris Clevelandis at the same time. The defenders fired down on their numbers, hoping the hail of gunfire would slow the assault.

Yet Chaos’ victory in the air battles had left the defenses of the interior of the city open. Deep striking terminators from the Thousand Sons appeared first, and then used their magical loci to enable masses of daemons to surround the Adeptus Mechanicus defenders that occupied the critical infrastructure of the city center.

At the walls, the Imperial Guard were the first to the fight, their tanks being placed at the far side of the walls, supporting their troops that occupied external trench works. The daemons were far too close and too numerous, and their great strikes tore through troops and tanks with equal ease.

Inside the city, the daemons of Slaanesh enacted their cruel plans: by slaying the souls of the citizens (including the crone and her grandchildren) they increased the blood power of the Daemonic forces. Soporific clouds of Slaanesh’s power began to accumulate within the city corridors thanks to the suffering inflicted on the innocent. The Adeptus Mechanicus fought back in the face of it, and called for help from the Space Marines who manned the walls.

A great Helldrake of Chaos launched itself into the lead of the forces of Chaos, but the resolute Salamanders remained undaunted. Their squads of Primaries Inceptors boldly leaped the walls and unleashed plasmatic destruction into the chest of the great beast, felling it in a wave of destruction.

Yet it was too late. The Eldar had sent sapper Kill Teams ahead of the mission, and they were able to blow one section of the wall right as the battle reached its climax. The Mayor of Future Cleveland managed to barely escape the destruction, but his aids were not so lucky. The Ultramarines and Salamanders steeled themselves for the incoming assault, even while some units turned to support the city that lay at their backs. The tanks of the Ultramarines were savaged by the Tzeentch daemon prince that reached them thanks to unholy speed, while the battle line troops of both Chapters poured their fire into the Hell Blade fighter that was the first attacker to exploit the gap in the wall.

Yet all the defenses at the gate were for naught, as the city center fell to Chaos. The Adeptus Mechanicus put up a heroic fight, but surrounded on all sides and dulled by the strange musks and magical energies of the Slaanesh daemons they could not survive. The Chaos Fire Raptor’s arrival to the city center furthered the wave of destruction, and helped finish off the Space Marine reserves who were dispatched to the city center. While one section of the city remained held by the Imperium forces, three sections fell to Chaos. Back on the battlefield, the wall was broken but manned, but the trench system had been entirely taken by the Chaos forces. The city of Futuris Cleveland was broken, fallen to the ravages of Chaos. Already their rituals began to be enacted, with the goal of turning the entire planet into a daemon planet to harness the dark energy that had always been bound in the crust and core of Clevelandis. 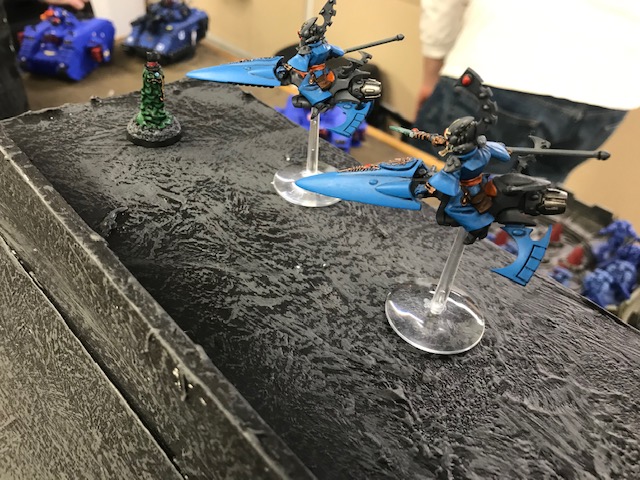 The Mayor of Futuris Clevelandis had thought himself finally safe, and that at least his mutation would make him seem appealing to those on the Chaos side–explaining it away to the Imperials had grown increasingly difficult over the centuries. He had dodged the wall collapse as well, and found himself atop an entirely empty battlement. Where had the space marine defenders gone? Then with a blink he realized, the Eldar had been operating with a singular mission the entire time. They had engaged enough Space Marine forces to clear the battlement, then blown the wall to force him to flee that way. As two farceurs on Jetbikes flew in at him, the Mayor felt a sinking sensation. He was far from safe. The Eldar had designs on him. What they were he could not say, but he knew as he surrendered that he was the central goal of their plan all along.

The game turned out to a great event, and was a really fun time putting it all together. Again huge thanks to all the players who build and painted things to make this go off so well. Stay tuned, as the next steps for Clevelandis and its erstwhile Mayor will be taking place over the summer of 2020 in the DaemonWorld campaign that we’ll be playing at Drawbridge games.

I didn’t get any of what I hoped to get painted for this event done, but I did manage to finally finish up the last touches on my two units of Nurgling bases. These little scamps have been mostly painted for a while, and just needed the final treatment. 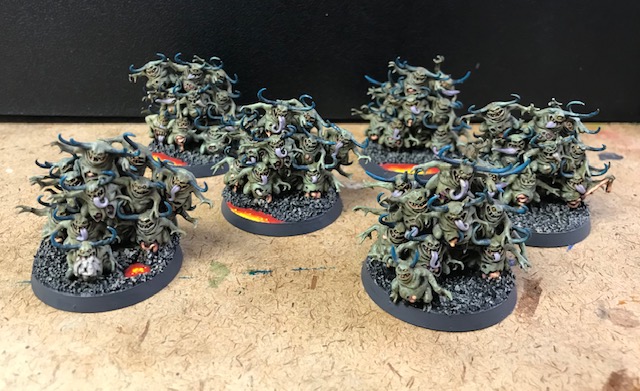